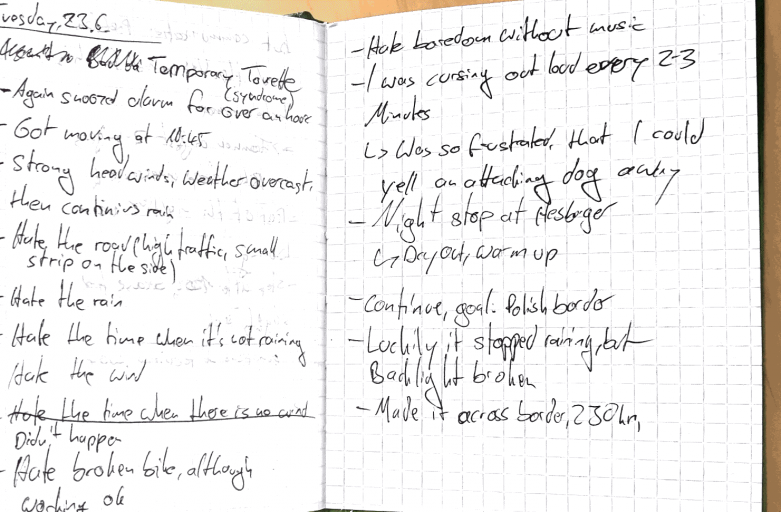 As you can imagine my motivation to get up in the morning was rather low. I had just started what was the second half of the whole trip, which already up to this point seemed incomprehensibly long. But from now on I wouldn’t have any musical or spoken distractions, and arriving at the end of this trip will also mean arriving at the end of my Erasmus-Semester.

Additionally I had already broken my bike again, only a couple of hours after it had been repaired to the best state since the start of my trip.

The weather decided to mirror my mood. Strong headwinds were pushing in clouds, which soon started a cold and mean drizzling rain.

The road itself was straight, flat, with lots of traffic, and had only a few centimeters of tarmac besides the white line indicating the right boundary of the lane.

If I stayed on this small curb and navigated through all the debris, the drivers took this as an invitation to not evade me at all and whizzed past me so close that I was very surprised that I didn’t come in contact with any of their mirrors

On the other hand, if I took the offensive line and drove in their lane, right about where their right tire would be, I forced them to overtake me properly which resulted in them leaving much more distance between me and their mirrors.

The trade-off was that each passing driver abused his horn as if I was insulting his mother through the choice of my line.

I took this general air of hostility and aggression as a reason to vent all my built up emotions and started cursing at everyone and everything. All. The. Time. (ergo the title of this post).

Even a dog, which started to chase me, stopped in its tracks quickly after I loudly began showering it with a barrage of insults.

In the evening I treated myself with a stop at one of the “Hesburger” restaurants which dotted the highway. I ate and drank coffee for an hour, until the waitress started closing the shop.

When I gathered all my gear I felt slightly sorry for her, since I left behind a huge puddle of rain mixed with dirt from the road.

But the hot beverage and fatty food had given me enough mental fortitude to focus on a new goal:

Cross the border to Poland before going to bed (50 km)

Soon after starting to pedal again I noticed the slight incline of the road. Weirdly enough it made me glad to go uphill, since it was a sign of progress, leaving the flat Baltics behind.

I finished the day almost directly after crossing the border and set up my camp in a small group of trees not far from the road, after 14.5 hours and 226 rainy, windy & horrible kilometers