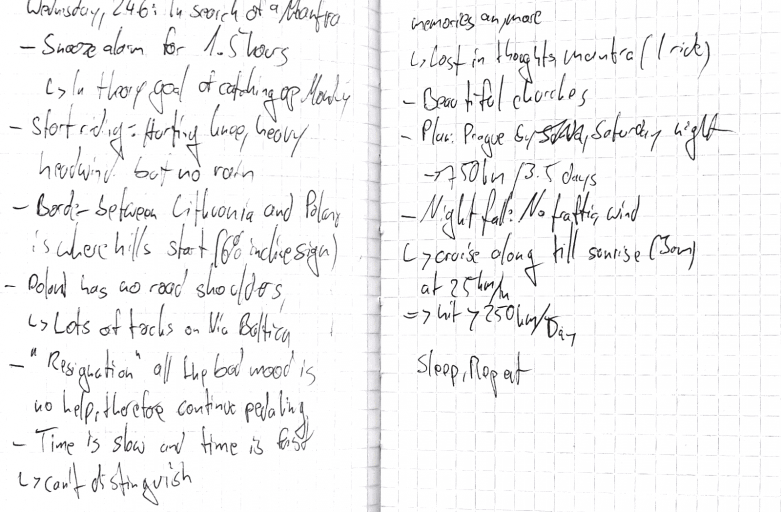 In search of a mantra

The habit of snoozing my alarm continued, for 1.5 hours today. In retrospect I don’t even know why I kept setting an alarm, if I would ignore it anyways…

What got me going was the plan to catch up the time lost during the repair on Monday. When I finally got on the bike, my knee started voicing concerns again, for the first time since Finland. To make a complete trio of annoyances, the head wind from yesterday continued and I saw signs on the road I hadn’t seen for weeks: 6% incline ahead.

At first I had to chuckle about how they even bothered to make a sign for such a small incline. In Trondheim you could barely walk in any direction for longer than five minutes before hitting a steeper hill, and here they wasted metal to warn drivers about what I considered a minor bump in the road. But soon after I had to admit that this little bump took more energy to conquer than I initially expected.
This sparked some worries about the upcoming Transcontinental Race: In around 4 weeks I’m supposed to climb complete mountain passes through the Alps???

Besides the hills, Poland had another difference to the rest of the Baltics: No designated shoulder on the road. For navigational ease and because of the lack of useful alternatives, I was following the main road to Warsaw, the “Via Baltica”. So I was sharing this road with an estimated 7 gazillion trucks. What a pleasant surprise…

After using the backup phone to assure everyone of my well-being, acceptance kicked in.
My situation wasn’t the best. But I also wasn’t going to quit. So I’d better stop the self-pity and just do the only reasonable thing left to do: Pedal.

What followed was this blissful state outside place & time. Having heard in one of the endurance-sports podcasts about the usefulness of a mantra, I occupied parts of my brain with repeating the words “I ride” with every pedal stroke. The other parts I let wander around in the countless memories of the situations, places and sensations of the past weeks. Sudden flashes of those memories would pop into my mind and I often had trouble even placing them in the right country or when they had happened.

Every now and then I’d actually look around me and notice beautiful churches made from red brick lining the road.
Also, when I was starting to look for a supermarket to fill up my supplies I became aware of the lack of huge chain stores. There were still supermarkets of course, but they were more in the old “Aunt Emma” style and you couldn’t spot them from afar just because of a big parking lot and neon signs, which were indicators I was usually looking out for.

Closer to evening I had gotten accustomed to my situation enough to think about the upcoming days: It was Wednesday, and I knew that Michi, a friend from university, was celebrating his stag night from Saturday till Sunday in Prague, which basically was on my planned route.
I set myself the goal of making the 750km in 3.5 days, so that I would arrive just in time to join the party.

Come nightfall, the traffic and wind died down and I actually continued riding till dawn at an increased average speed of 25km/h, surpassing my target of 250km by a little.

And now I just had to sleep & repeat…