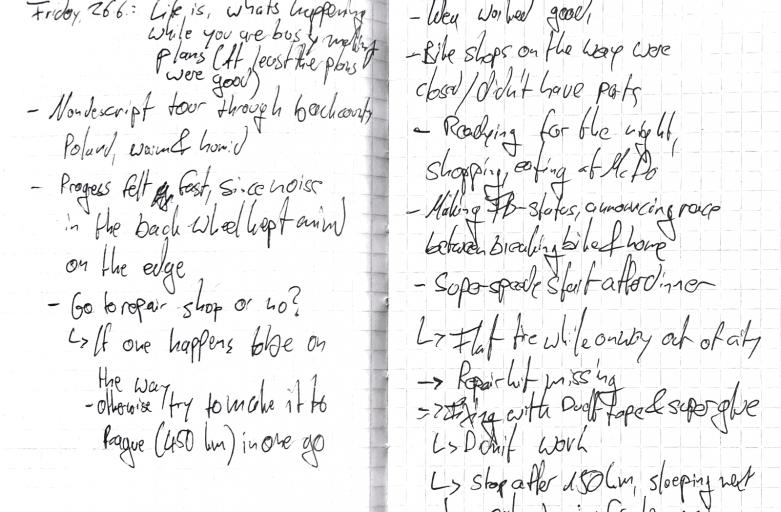 “Life is what is happening while you’re busy making plans”, or: “At least the plans were good”

I had finally left the bad moods behind! Just everything felt better, I wasn’t downed by the sheer dimensions of my undertaking anymore.
The punctures yesterday threw me a little off schedule, but Prague was now only 450 km away, and I had more than 35 hours till the stag night started.

So while packing I toyed with the idea to do it in one go, arrive Saturday morning and grab some sleep before partying. But I wasn’t fully committed to that idea, since I heard the bearing in the rear wheel grinding again. Additionally, I was out of spare tubes, so a fully stocked bike shop would be nice. Problem was, I hadn’t seen a shop solely dedicated to bikes since Riga, so I wasn’t too optimistic about finding one in the Polish hinterlands.

But I wasn’t sweating those issues too much. The weather was nice, I had an ambitious, but achievable, goal and the promise of sleeping in a bed the next time I’d shut my eyes all made me eager to get going.
When shopping for food, I tried to ask whether there were any repair shops around, but the language barrier prevented a proper description of where I had to go. After wandering and looking around for the shop for a while, I decided to stop the search and instead continue on cycling.

In the evening I checked Facebook again, announcing my end game: Being home in less than 5 days

Somehow just writing these posts, without even waiting for feedback, is always motivating and good for the moral. So I got back on the bike, looking forward to cycling through the night, hopefully arriving in Prague soon after sunrise.
But only a couple of minutes later I could feel how my rear tire went soft… Another puncture. Well, since I was out of spare tubes and I’d have to look for the patch kit first, I rolled my away from the road into a park, to have some space so that I could rummage through my stuff, trying to find the repair kit.

While I was removing the bags from by bike I got a slightly eerie feeling. The park was pretty dark, there were some drunks at a café nearby on the street and a couple was getting a little touchy-feely on the far side of the park.
For probably the first time on this trip I started to feel a little vulnerable. I was sitting here, spreading out all my belongings in search of that little patch kit, and it was way more likely for a single person or a small group to encounter me here, than if I were somewhere in a forest next to a road, which is where I was usually unpacking and unwinding.

After a while of searching I had to concede to the worrying thought that had appeared yesterday when I had fixed the other punctures:
I hadn’t seen the patch kit in a long long time and had probably lost it…
But I had been looking forward to riding through the night so much, I wasn’t ready to give up yet.

Stupid me had thrown away the old tubes, but assessing my stock of gear available to me left me with super glue and self adhesive repair fabric for outdoor clothes.
So I tried to cover the hole with the fabric and then coat everything with multiple layers of glue, but the hardened glue was just too rigid and broke every time I started inflating the tire.

So here I was, just having gathered some hope during the day, all my belonging strewn out in front of me, getting defeated by 2 punctures in less than 400km after having ridden without getting one flat tire for most of the year.
Reaching Prague in time for the stag night was off the table…

Defeated I started to roll my bike out of the city, hoping there’d be a forest or some other place that would offer itself to bivying. Sadly, there were mostly open fields around and no real place to hide myself and sleep comfortably.
Since I had to go back to the city the next morning to grab new tubes, I didn’t want to stray too far and in the end settled for a small orchard as my camping place.
I could hear people from the nearby houses, having BBQs and being jolly, but I just tried to stay as close to the ground as possible, hoping no passerby would notice me sleeping under the tree.