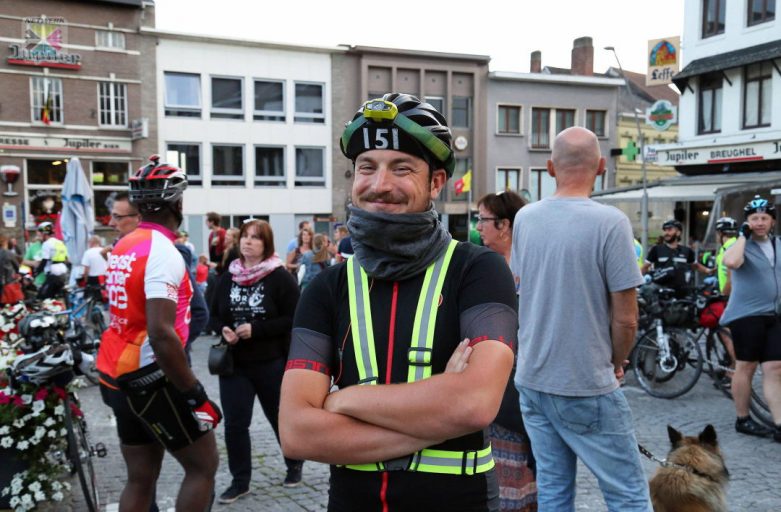 After the call for the racers to get ready sounded, the crowd formed and spectators lined up on the road. The start in Geraardsbergen is quite an event: The racers do a “neutralized lap” through the city, meaning it’s fairly relaxed riding past hundreds of people holding torches and cheering you on. Once you reach the market square again, the race is on and the riders sprint up the iconic climb of the “Muur van Geraardsbergen”, a short little hill with loads of cobbles. This is also the first stress test for the bike, with gears crunching and some items getting shaken loose. This hill sorts the unprepared from the rest, and I survived 😀

Once the hill was climbed, the race was officially on and everyone was flying away on their planned routes

Source: Trackleaders
Just a couple kilometers from the start I realized my rear light had stopped working. The wires fashioned to the borrowed front light came undone from all the cobbles at the start, guess I didn’t survive them without scratches after all. Since I wanted to keep up with the flurry of riders and stay in this flow, I just turned on my battery powered light and kept riding.

Shortly after midnight I crossed into France, my route leading me through lots of small villages (which look exactly like in the World War 2 movies). Once in a while I’d hear another cyclist coming up from behind and overtake me, but although I was apparently slower than some other riders, I was generally in a good mood and satisfied with the general situation. Everything was going according to plan, and my worries about the lack of preparation seemed unfounded.

Now came the meditative part of the race: Pedaling. After midnight and before sunrise there’s little outside stimuli, just you, your bike and the road.
Once sunrise arrived, I started to feel the effects of being awake for close to 24 hours. My eyelids got heavier and heavier, sometimes even closing for a second or two. From experience I knew that this would happen every day around sunrise, but that if I were to push through the tiredness, it’s possible that I regain my energy once the sun is up and I’d be able to keep on riding for the whole day.
Since the tiredness started to get overwhelming and I sometimes got jerked out of micro sleeps by the feeling of losing balance on the bike, I figured it’s time to check whether my caffeine-fasting had been useful: I had stopped drinking coffee a couple months ago, hoping to increase the sensitivity of my body to the substance.
For really dire situations like these, I had brought some caffeine-pills from the pharmacy. These performed way better than expected, just moments after I swallowed the bitter pill, I felt more alert and ready to pedal on. This was probably a complete placebo effect, but I was happy with whatever kept me on the bike.

11 hours and 220 km after the start I stopped at a supermarket in the city of Dormans, South-West of Reims and restocked my supplies. Since it had gotten pretty hot, I allowed myself a little nap in the grass in front of the supermarket before I pushed on into the heat of the day.

Early in the afternoon, I came through Proxins, which looked to be the last big city for over 60 km on my planned route. Since France is surprisingly sparsely populated with supermarkets, I diverged from my planned route into the center of the city, hoping to find a shop. But downtown there were only small cafés, nothing to satisfy my lust for heaps of ice cream, chocolate milk and pizza. So, after another nap in the shade on the sidewalk, I continued on, only to find a big supermarket a couple hundred meters later. With a filled belly, ice cream in hand and stuffed pockets I pedaled on.

When I reached the planned sleeping spot for the first day it was only 16:00 and I was still feeling pretty good, so I kept pedaling through the French countryside with its little villages and farms, my route running perpendicular to all of the big roads.
Only after the sun set and more than 24 hours after the start I started to look for sleeping spots. I found a nice meadow behind a hedge, and having cycled 75 km further than planned for the first day, I was very pleased with myself.

Last year I had ridden without specific targets for each day, just the knowledge of how much I have to be pushing on average to make it to the finishers party. A rookie mistake, since long flat days can give you the impression that you are doing better than planned, only to then be surprised by much time is wasted on hillier days.
Since I had taken all that into consideration when creating my plan, I could afford a good amount of sleep without worrying too much (a good amount being 5 hours instead of 4).
So I set my alarm, hung my kit out to dry and crawled in to the bivy bag…