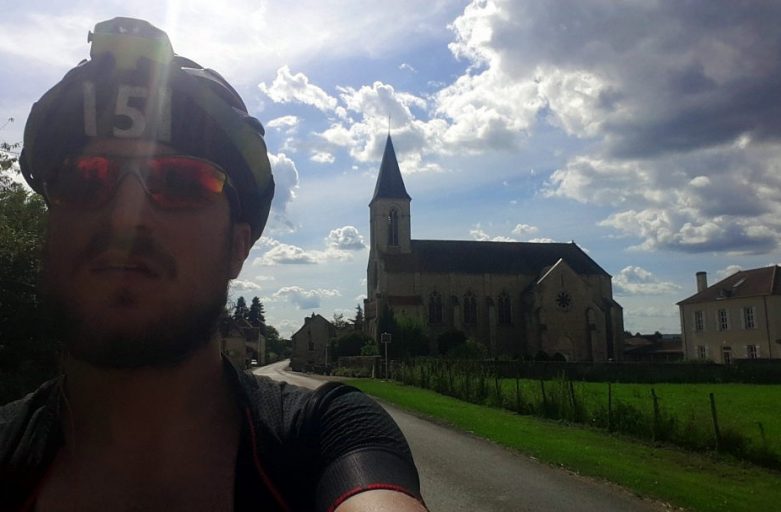 Due to being more than 75km ahead of schedule, I treated myself to almost 6 hours of sleep, trying to recover some energy for the big days ahead.

But besides that, the day was fairly uneventful. Listening to podcasts and audiobooks while pedaling over more rolling hills through the hot and humid weather. I was anxious to reach Switzerland and the second checkpoint, since the climbs there had the potential to end my race: I had never ridden uphill for so long on so many consecutive days as the schedule called , and I didn’t know what it would do to my knees.
But as always, this big challenge in front of me overshadowed the still lengthy approach, so at times I got a bit impatient with my perceived lack of progress.

In the afternoon the rolling hills gave way to the Saône-valley, which wasn’t really an improvement because now I even lost the small hills as features to set intermediate goals. This also showed in my average speed, which didn’t improve at all in the flats and just hovered around 20km/h, a very leisurely speed indicating I wasn’t focused on riding.

Nonetheless, I managed to miss shop hours in the evening and had to refuel at a kebab store where I met Max and Adam, Swedish guys doing the race as a pair. Over pizza we chatted a bit about how they had issues with the bearings in a dynamo hub and would have to try to get it replaced in order to continue the race.

I again rode past my planned sleeping spot, but actually decided to got to bed in a vineyard only 30km later at 23:00. Going to bed this early and losing ~40km of my buffer for no good reason could be considered almost cocky, but to be honest I was just a bit demotivated by the dull day and didn’t have the guts to face the 600m elevation gain coming in the next kilometers.