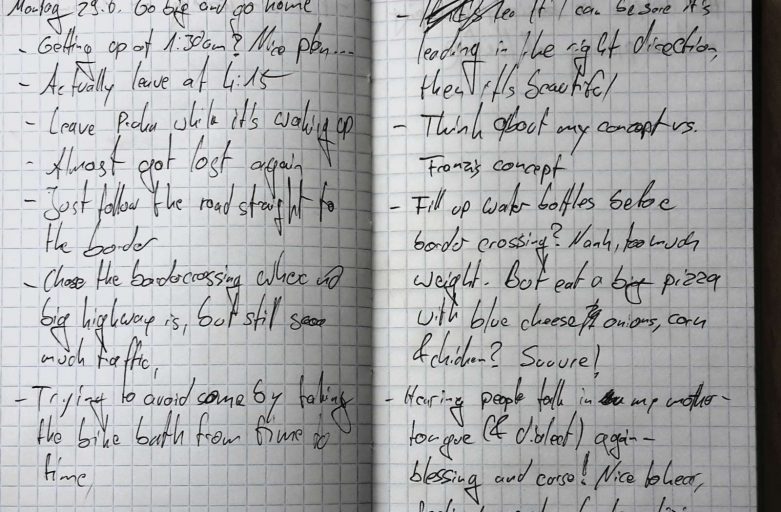 The theme of the whole trip continued: I overslept. Whilst the original idea had been to get up at 1:30 and be moving at 2:00, I reset the alarm for a couple of hours later.
Once I had gotten my bike from the night-clerk of the hostel, I was cycling out of Prague with the rising sun, just as the streets started to get busier with people getting to work.

Navigating a city with a printed cue-sheet still wasn’t any easier, but I had prepared by planning the route to contain as few turns as possible and to follow bigger roads. The problem was that one of the bigger roads was actually the Autobahn, and since I really didn’t want to die on the last day I did have to reroute on the fly. But further towards the outskirts of the city, I rejoined the original planned route, and from here on out it basically was just following the same road towards the border. Obviously, since it was the most direct way, the road was fairly trafficked. So sometimes, when I was certain, I took some smaller roads running in parallel to the big one, other times I just put my head down and ignored the traffic. I was so close to home, and so determined that some honking drivers wouldn’t stop me.

After the city Pilsen the area got more rural and some of the bike paths were very beautiful and quiet. This gave me some time to compare my approach to the trip (lots of cycling, little contact with locals) to that of Franzi, another exchange Student who was cycling home from Norway (We had done the Everesting attempt together). She took her time to get to know the locals, couchsurfed around and had lots of fun stories together with other people to tell on her blog.
I on the other hand had spent the past weeks fairly isolated and had basically rushed through the countries, without picking up much of the local culture. I knew that this was the right thing for me to do, since my main goal was to get to know my body better and prepare for the upcoming Transcontinental Race. But still, I knew that I would have to repeat a similar trip someday, and take the time to soak up more impressions of the area and the people around me.

But even while daydreaming, I was still making good progress and kept the pressure on. The border was  reachable, and as with the past borders, there were some uphill involved. Even though it was a pretty hot summer day, I opted against refilling my water bottles at a gas station, wanting to avoid any additional weight.
The hypocrisy of this line of thinking became apparent to me after I had ordered the biggest Pizza I could find on the menu in a restaurant close to the border, only a couple dozen kilometers later. I guess my mind really became toast over the past couple of days…

While I was waiting for my pizza, I was able to listen to the family at the neighboring table. It was an uplifting feeling to hear strangers talking in my mother tongue and local dialect again, it signaled to me that I really was close to home. But the longer I listend, the more I realized that the whole group was just gossiping over relatives of theirs and complaining a lot about the injustice of life. It was just such a cliché of a bitch-and-moan conversation, that I was wondering whether I had spent the past half year in a bubble of positive emotions, surrounded by exchange students? In Norway I hadn’t been able to eavesdrop on random strangers, I hadn’t understood most of the headlines in the newspapers and we didn’t have time to read much of the news from home. Had I unknowingly avoided most of the negativity in the world?
Before any deeper thinking could happen, my Pizza arrived, and as usual Pizza delivered on its main functionality: Alleviating all worries.

Shortly after lunch I finally crossed the last border of the trip. It was early in the afternoon, and I was less than 200km away from home… I was elated! Until I realized that German road infrastructure was different and that I had planned my route on a road forbidden for cyclists. Instead, we pride ourselves in lots of separated bike paths, sometimes running alongside the road, sometimes just following rivers or other landscape features. These are a blessing, if you are taking your family for a nice little ride on the weekend. They are a curse, if you want to cover long distances, have no clue which of the dozens of signs for villages in a range of 1-5km to follow and just want to go in a specific direction, following a specific road… Which is why it took me ages to figure out what to do in the city Cham, until I found signs for a scenic bike route leading in the general direction I wanted to go. My original planned route was further West to that, but this was a bike path that was marked for dozens of kilometers, and not just a couple.
And I figured since this was basically my backyard, and since I knew Straubing was at the river Danube, and since I had cycled along the Danube before, I thought I could just wing it and ignore the cue sheet. Oh boy, was I wrong…

The first kilometers were fine. Sure, the bike-path had some gravel sections, but I valued progress over comfort and just kept pedaling. According to the signs along the path I was following some old railroad, which had been used for coal or something. I didn’t really care, but it was beautiful and without traffic. Problem was, that the shops would close fairly soon, I was running low on food, and this path wasn’t leading past any villages big enough to have shops. So I had to push the pedals hard in order to make it to the next city before closing time…

I finally reached a supermarket just within closing time and had gotten very very hungry. I walked through the aisles and kept grabbing stuff, until I barely could carry any more. Then I just sat on the curb outside, munching and trying to stow as much food away on the bike as I could. In the end I had actually bought too much and had to leave some stuff behind. It’s funny how my brain close to the end of trips always seems to just shut down…

Soon after I cycled through Straubing, where I found a couple of signs with maps of the general area. I realized that the shortest way would be to aim straight for home, cutting across a wide area with just countless small villages and no bigger cities that would be marked on the signs. But if I were to get lost, I could just turn south until I would hit the river Isar. Along that river is a bike path, which I had cycled as a teenager with my little brother and a friend, so I knew that I was able to find a way home.
Confidently I set off into the night, keeping the direction best I could. But after two hours the river valley I was following wasn’t distinguishable anymore from the surrounding hills. Also, I had already been travelling for over 20 hours and just crossed the 300km mark for today, so my mind had already started to play some tricks on me, underestimating distances constantly and wondering whether I had taken a wrong turn.
So I opted for the backup plan: Follow the signs for Landshut and head south towards the river Isar. I knew that it would be a detour, but I wanted the safety of knowing exactly where to go. And even with the detour, Landshut wasn’t that far from my parents place. I would be able to power through the tiredness and be home before the rising sun. Or so I thought.

A little while later, I arrived in the city and soon recognized certain roads. From there, it was easy to find the bike path. I made it! Home turf! Only roughly 50km to go, and it was just midnight. With newfound energy I directed the bike towards the signs saying Munich, which I would follow for a while, until I would take a right turn at either Moosburg or Freising, shooting towards a little village somewhere North of Munich.

Just to deflate my newfound enthusiasm, I managed to take a wrong turn before even reaching the city limit. I only had to retrace my route for a couple of minutes before I was back on course, but my mental and physical energy was running low, and it was maddening to make such a mistake so close to home.
Which is why I got even more pissed, when the signs for the bike paths disappeared in a village 5 km later, and I sat at an intersection for half an hour, not knowing what to do. I was just too tired to make any rational decisions, but too determined to give up and take a nap. I knew that I would have to cross the river at some point, but didn’t remember exactly where, and therefore spent the next 2,5 hours cycling like a drunk lunatic, crisscrossing all over the map and getting more and more frustrated with the fucking bike path signs, my inability to remember the way and the whole situation in general. I took small roads leading towards the marshes of the river, only to realize they were dead ends and having to retrace my route again. Somehow none of the villages or cities on the bike path signs made any sense to me, and I had a feeling that I was going in circles. At some point the battery of the GPS watch ran out, which is why the most embarrassing parts of my little odyssey are thankfully not on record.
Soon the sun was rising, and finally I had to admit defeat. In what felt for the umpteenth time I had chosen a wrong road leading towards the river, only to find myself in a dead end, the way blocked by a dense forest. There was one of those high seats for hunters, which served me well as a location for a nap.

When I woke around half an hour later, the fog in my mind had cleared a substantial amount and I felt like I would be capable again of making more rational decisions. Once I had ridden out of the dead end, I decided to ignore the bike path and just follow the roads, hopefully not ending up on the Autobahn.
Soon after I actually managed to reach Freising, from where on I finally was able to remember the whole way home. At this point I was mostly using my energy on just functioning, so there weren’t many emotions or deep running thoughts for the last bunch of kilometers.
Only when I reached my village, I at last began to realize that I had made it. There would only be one small hill to climb towards my parents house, and then I would have won the battle against the breaking bike and the hordes of traffic. Just as I reached the foot of the little hill, a car with a trailer overtook my so slowly that I was able to hold on to the trailer and therefore managed to get a lift until right in front of the doorstep… 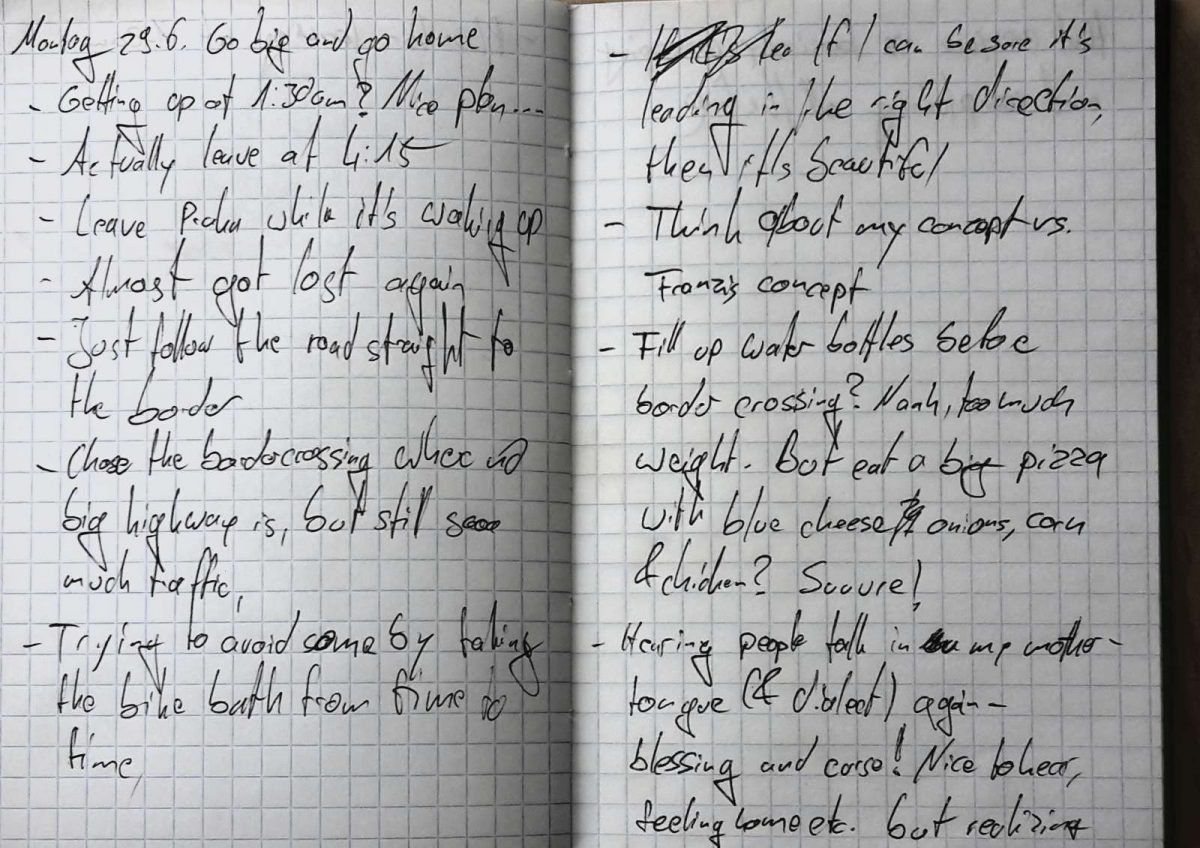 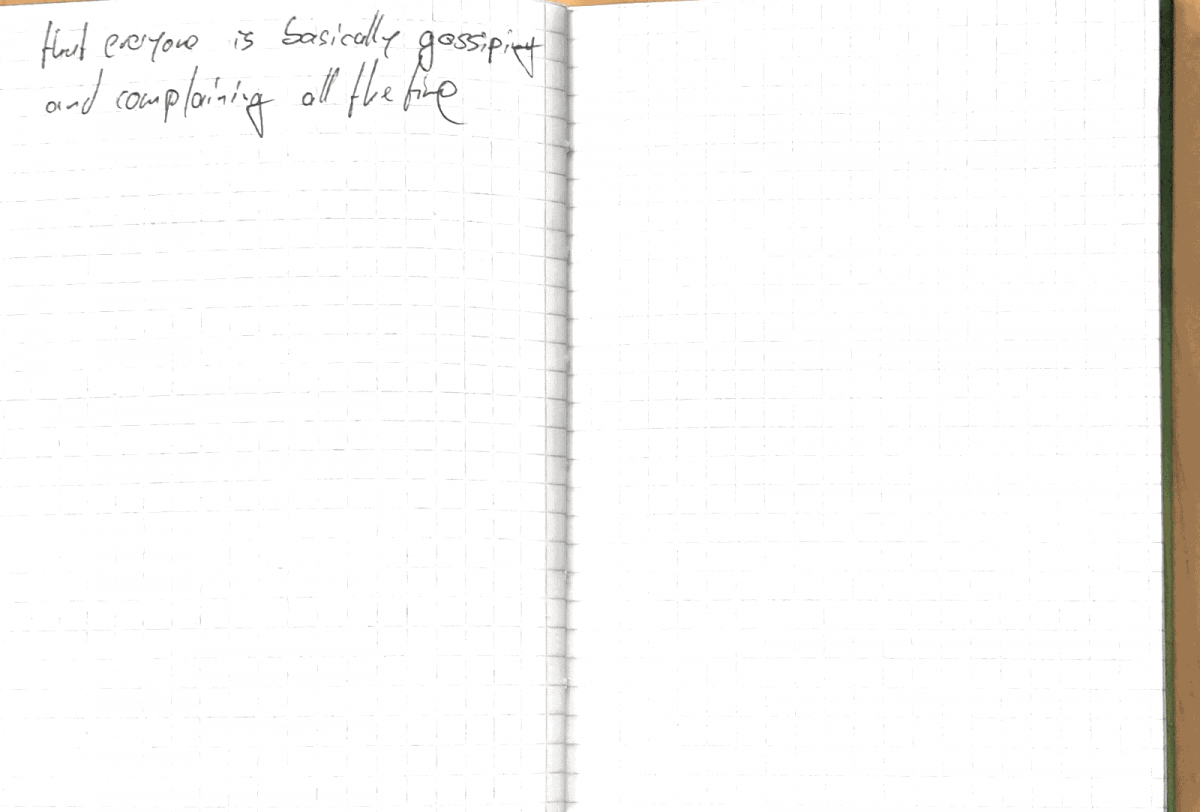