-feels so long ago, I almost forgot what happened

-up next: climbing… Around 200km through the Durance Valley to Italian border, and then to the foot of strada Della assietta, the next checkpoint
-hot weather, mostly bigger highways
-met Chris Bennett (hopefully I remember the right name??) , the guy who cycled up to Belgium from Istanbul in the weeks prior to the race. He’s a tour divide veteran and did the TCR already last year. Interesting guy, looking forward to seeing him again
-beautiful views into the Durance 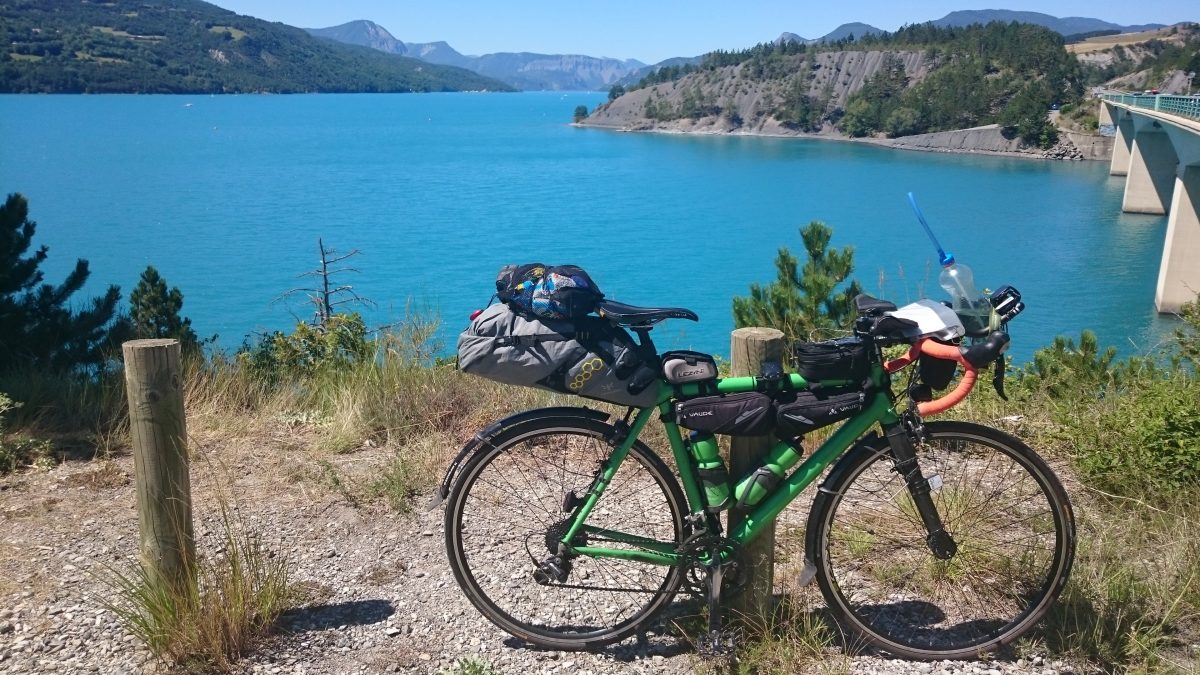 -did I mention it was hot?
-met other riders left and right, since there are only so many routes through a valley…
-less focused riding, since it was the day after climbing that hyped mountain
-once it got up the first real pass to the Italian border, I was in good spirits, since I managed to drop two other riders, and that even though climbing was never my specialty and I still was carrying stuff with me I had planned on sending home
-got over the border late afternoon, making an evening at the foot of the checkpoint possible
– met Chris again, talked about whether crossing the strada at night or not.
-reaching the checkpoint required more climbing than expected, but everything was working pretty good, no serious knee pain, speed was ok
-reached checkpoint in hotel. All riders were looking for a place to stay, none were planning on crossing
-I still felt good. The TCR volunteers advised against descending the pass at night, so my plan was to hang around at the checkpoint till midnight. If my body would plummet, getting tired and stuff, I’d stay, otherwise I’d start climbing, hopefully going downhill with the rising sun
-had nice dinner with other riders and a shower in the hotel
-set off at midnight. Climbing was surprisingly easy and fast till the top of the ridge. The gravel wasn’t that much of a problem and made for an interesting ride, choosing the right line all the time.
-once on the ridge though I severely underestimated how long I’d be up there. I thought after an hour the downhill would start, but it would just go on and on and on
-it was getting tiring on my wrists, with all the shaking
-woke another rider bivying at the top
– I found a lost dog, with ripped collar and stuff. But there was a caravan trailer (who puts a trailer on a ridge of over 2000 meter??), so I knocked to make sure. Woke some Italian dude at 2am, we both probably had our “what the fuck is this dude doing here at this time” moments, until he told me it was his dog
– carried on along the ridge. Beautiful moonshine, views into the valley, some steep drops to the side of the trail kept me awake

-an eternity Later descending started. People had said the descent was good, with an almost paved road and stuff. What I didn’t research was that I would first descent through the same kind of paths I rode up, leading to a full body massage lasting over an hour
-what frustrated me the most though was that I had to climb again for a couple hundred meters before reaching the proper road down into the valley
-had to take multiple small naps, because I was starting to have micro sleeps on the bike, which isn’t ideal in this terrain
-all in all it wouldn’t have been too bad, if I had done proper research and would have started with the right expectations. I would still have climbed it at night, but  wouldn’t have waited for the end after every corner
-once down in the valley in the late morning I collapsed again in some small forest for some sleep. By now I don’t even use the bivy bag and just pull on raingear to keep the bugs out