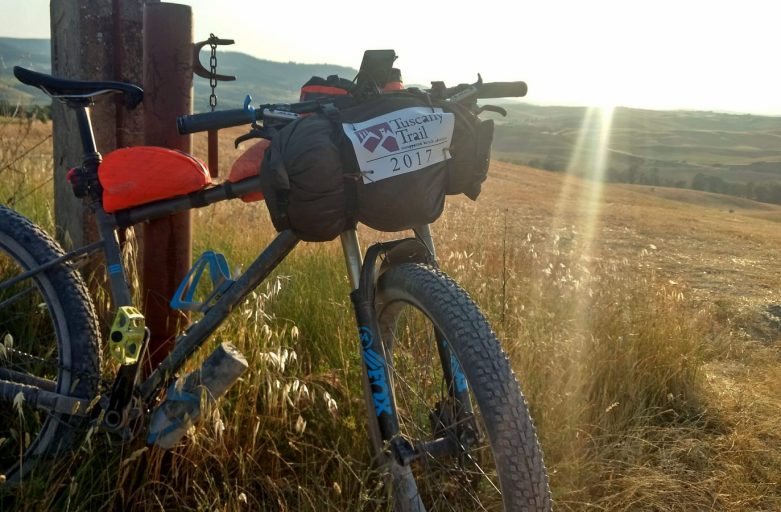 The Tuscany Trail is a self-supported ~530km long mountain bike “adventure race” with over 10.000m of climbing, going through some of the most scenic places and villages this section of Italy has to offer. Not all of the 500 starters treated it as a race though, a sizeable amount was touring the route at a more leisurly pace.
I personally wanted to push myself on this trip and see how fast I can go, but considering the fact that I hadn’t even yet ridden my MTB the total distance, the failing to complete the course was not entirely unlikely. Nonetheless, the goal was to finish in under 3 days, split into 2 x 200km and one day for whatever remained.

I drove down the day prior with two friends who would do some sightseeing during the days I’d be on the bike. For the first time I actually felt pretty well prepared, having created and followed a pack list with over 100 items on it.

Packing all the stuff for #tuscanytrail Sadly my phone won’t connect to the Italian network, so probably no updates from the road

On Friday morning all riders met on the main square of Massa and I gleefully checked out other people’s bikes, commenting to my friends on how expensive these parts where, or which bike I’d ride if money were no object. The variety of bikes was astonishing, from full fatbikes to basically roadbikes with thin tires.

A little while later I wished my escort goodbye and all the riders rolled out, speeding towards the first of two major climbs for the day.
In the beginning the gradient was still acceptable, but soon it became too tough and everyone started pushing their bikes uphill. Once at the top the path turned into singletrack, so groups of dozens of riders formed, waiting for opportunities to overtake each other on the way down. 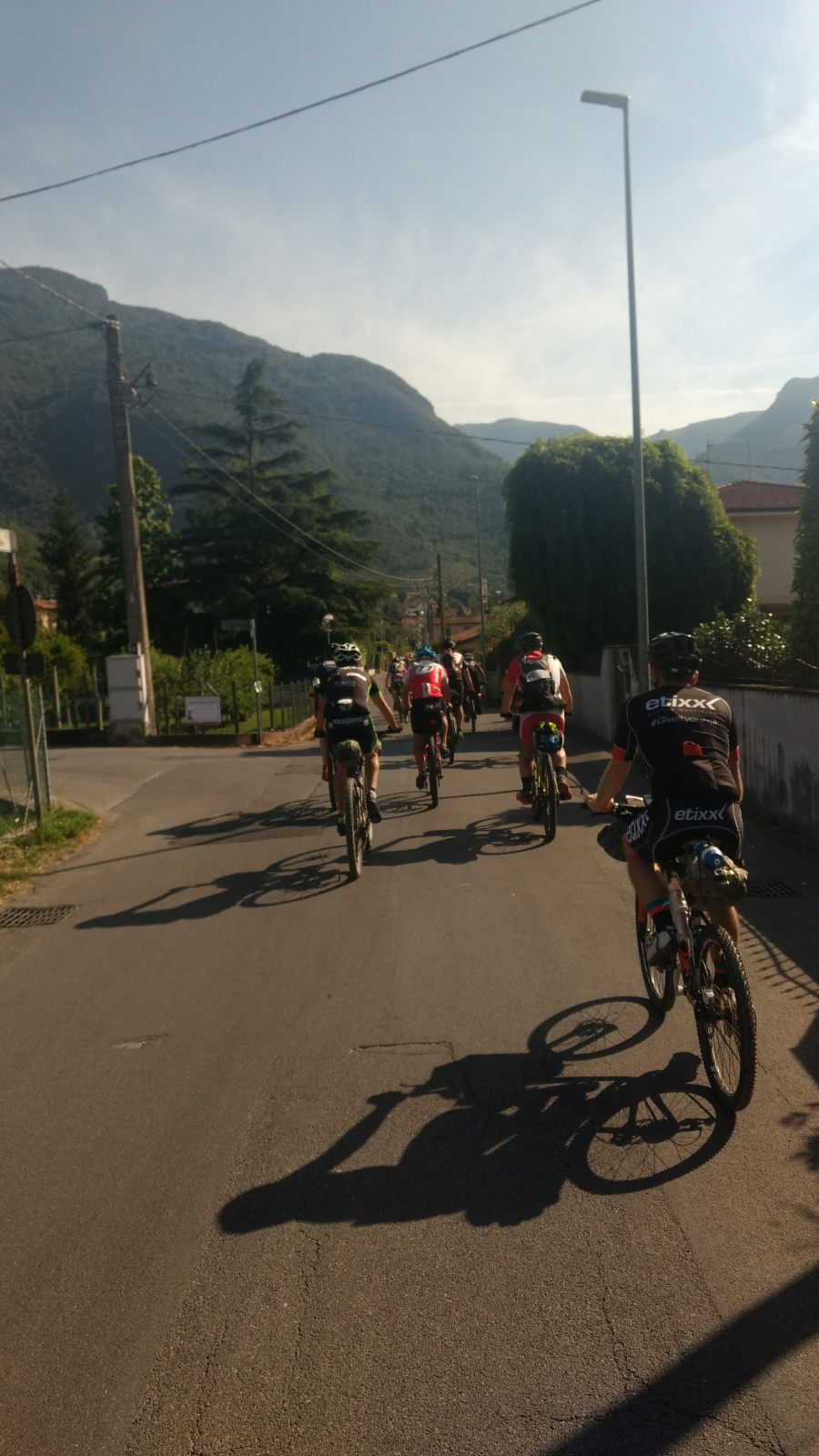 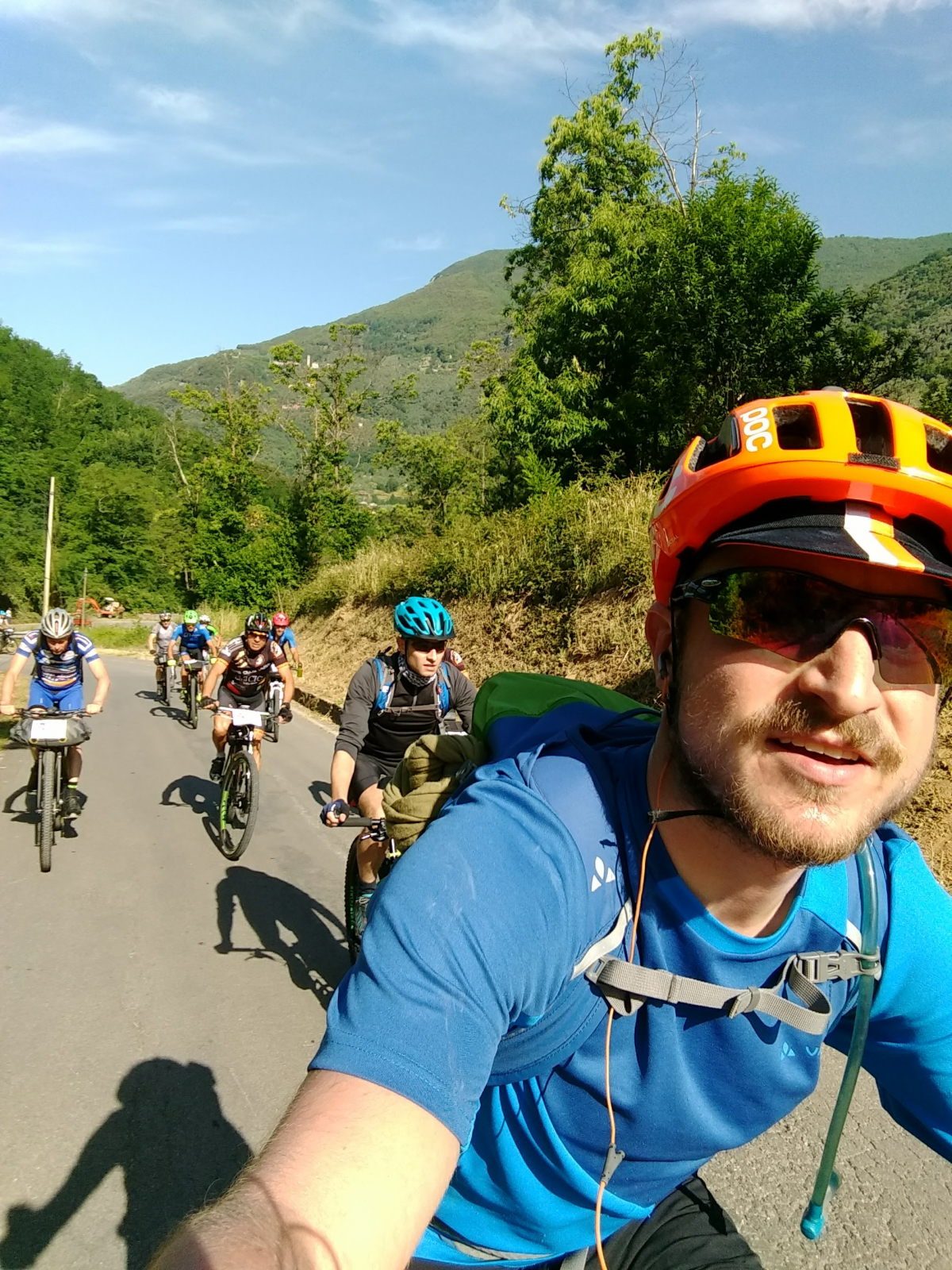 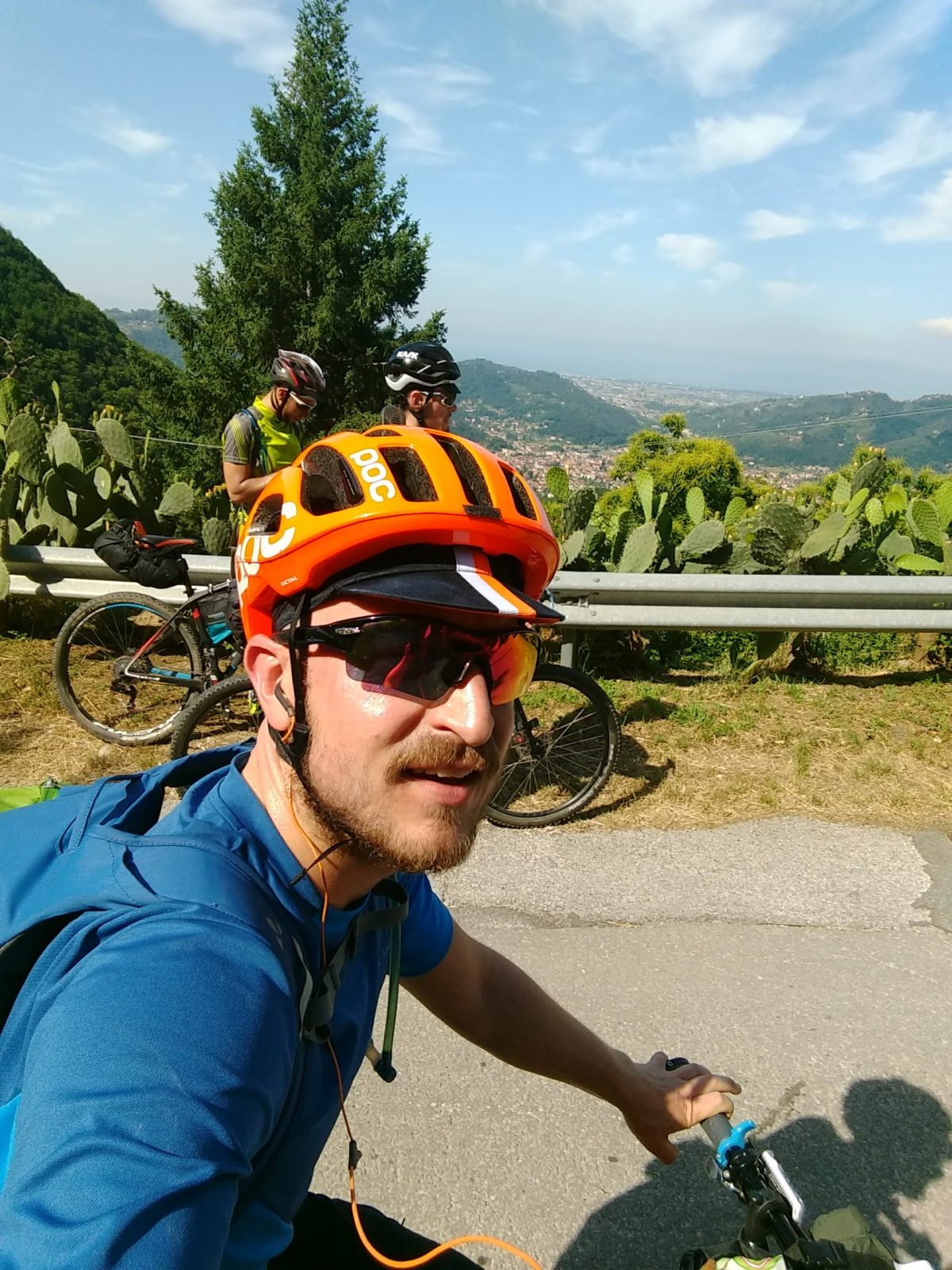 Back down in the valley I still had more than enough food and water to tackle the next big climb right after. It was noticeable that many riders had opted for a break in the village, since the uphill was way less crowded.
The second downhill had way more rutted trails, with big and loose rubble as surface, making me pity anyone with thin tires.

Late in the afternoon I arrived in the second valley, now having to cross 40km of flatlands until reaching Florence. I leapfrogged with a fairly big rider on a super expensive bike, who had apparently crashed earlier. However he was so eager to push hard and go fast, that he kept missing turns and ended up overtaking me again and again.
A little while later and without words I teamed up with another rider, taking turns in the wind and drafting behind each other.
That way we reached downtown Florence just in time for the sunset. Since everything was so crowded by tourists, I skipped dinner in the city and hoped to find a restaurant in one of the suburbs. 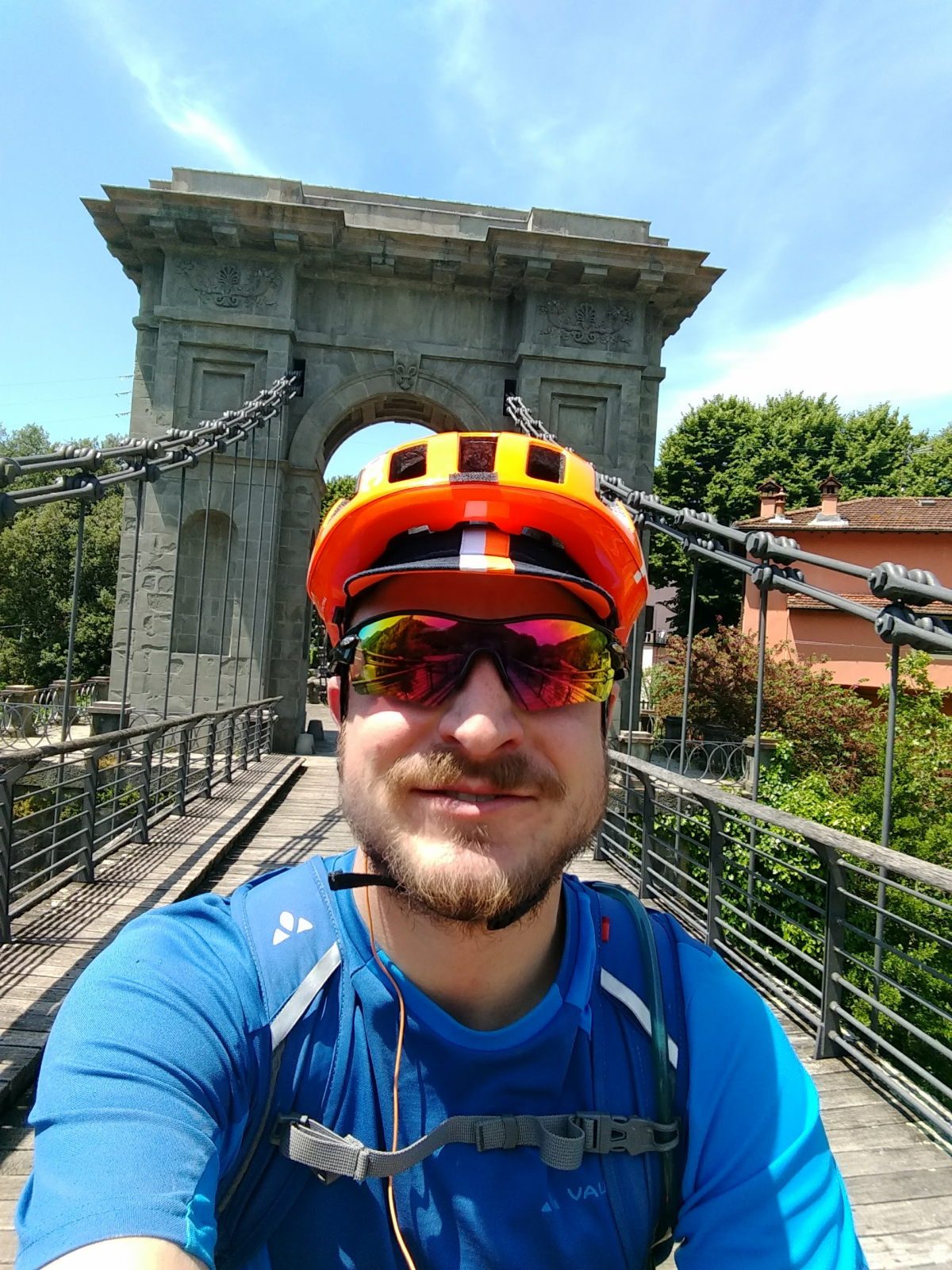 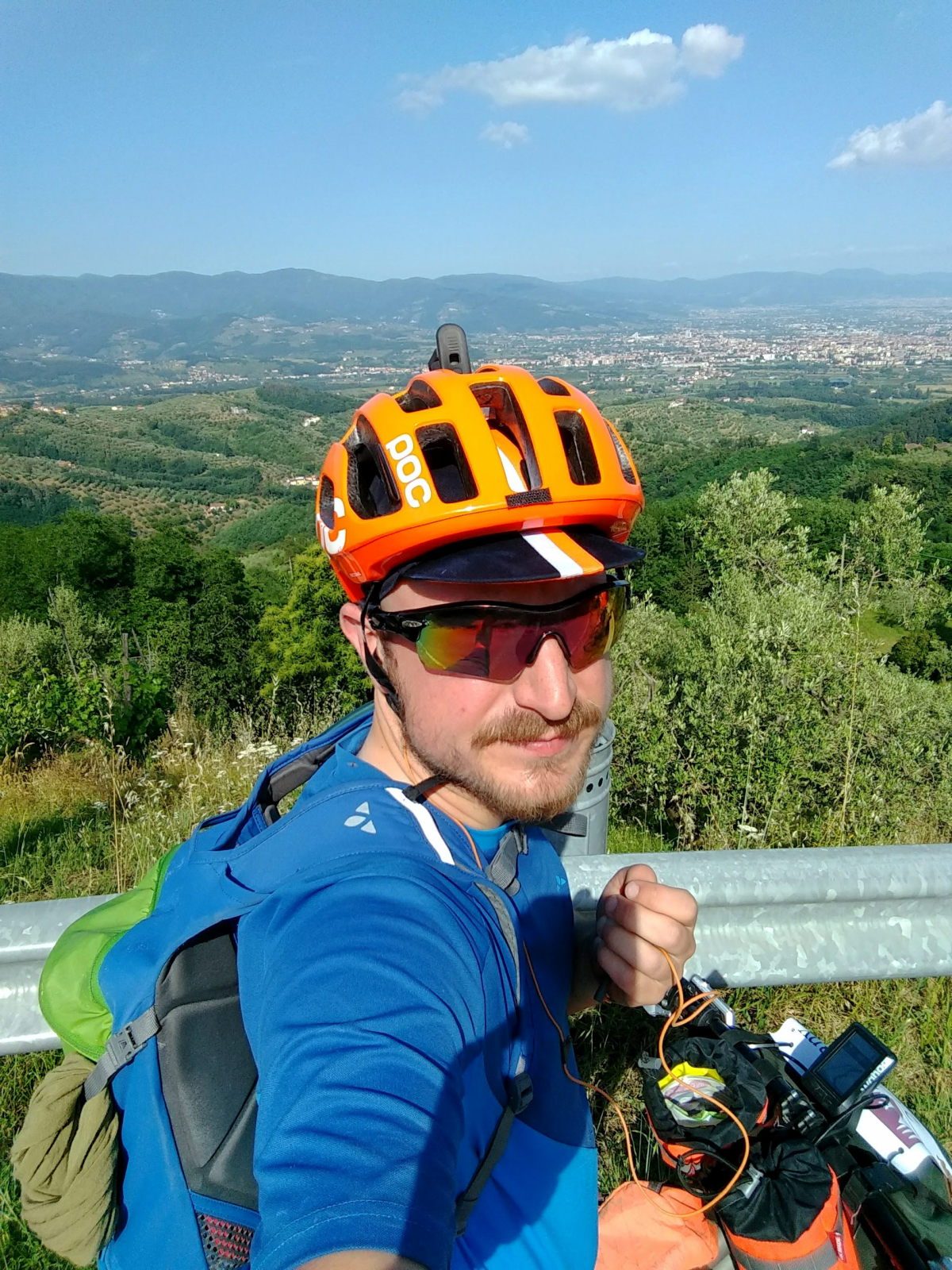 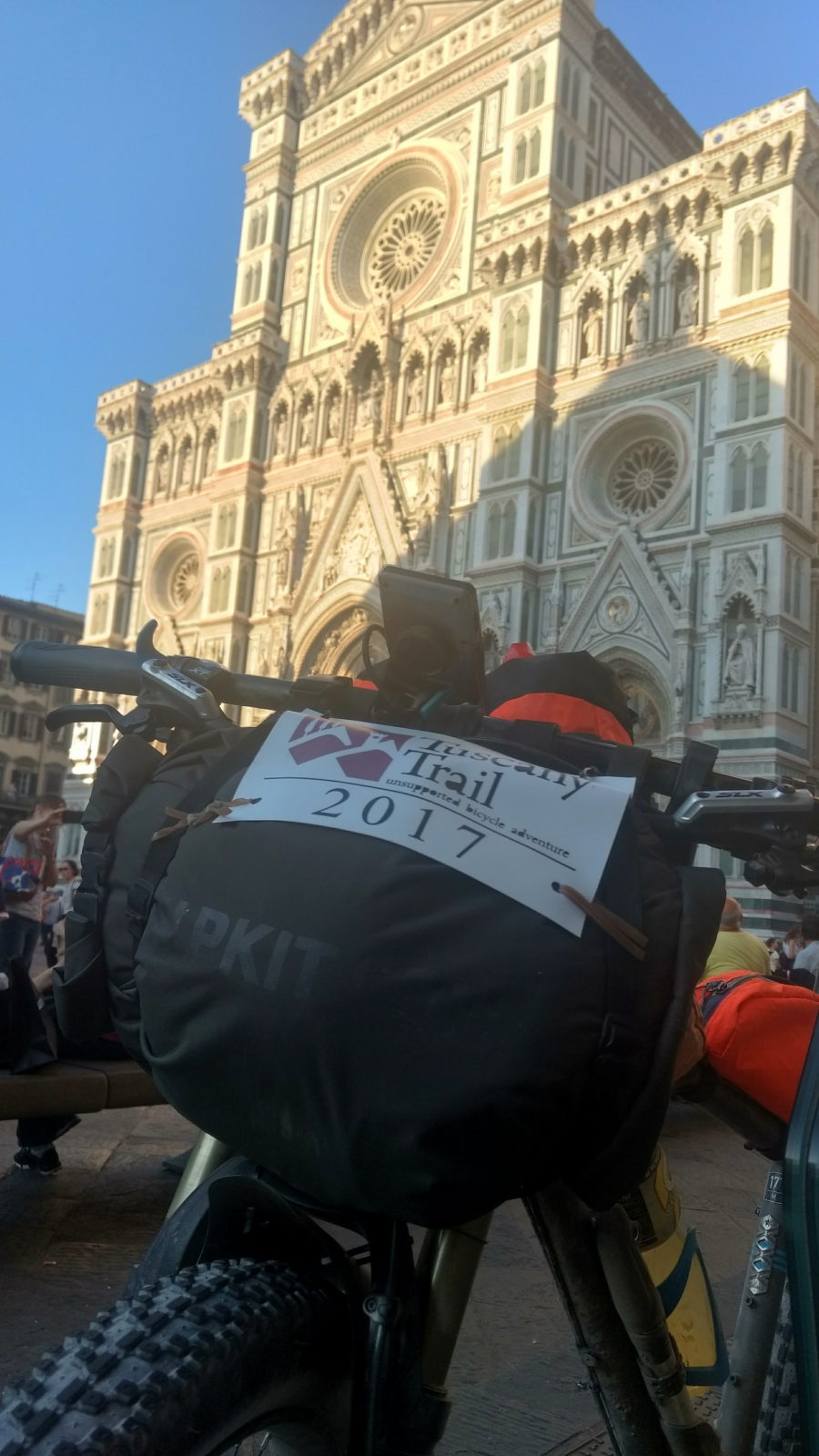 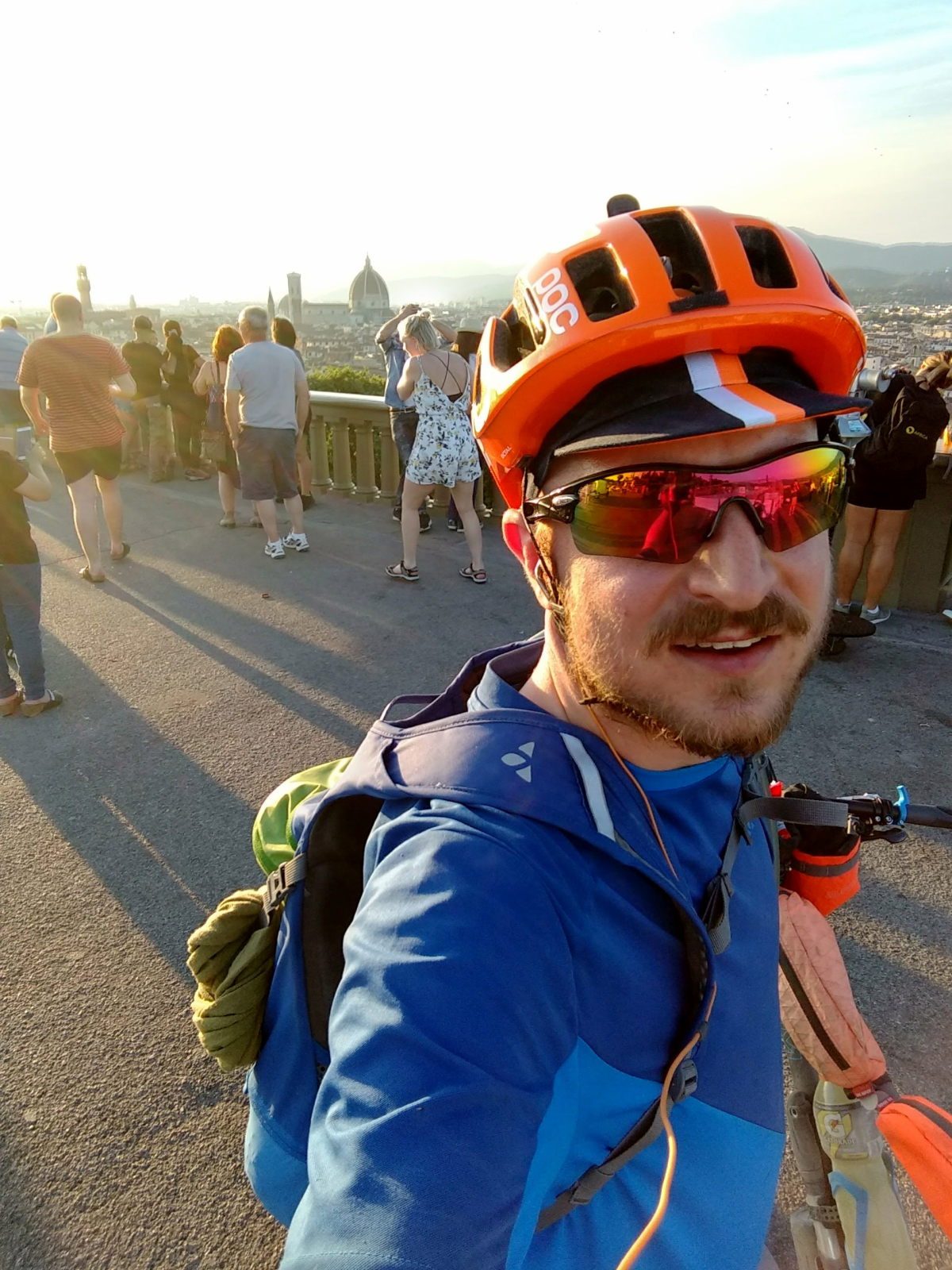 Problem was, that once out of the city the landscape turned very rural and there wasn’t anything resembling a restaurant in sight. Apparently I hadn’t been the only one with that idea, and I met a couple of other riders at one of the drinking water fountains, together going on the hunt for some warm food. Luckily we were informed of a restaurant only a little ahead, where the 6 of us stormed in, in hope for loads of pasta.
Once we were seated at the table, it became obvious that we weren’t the usual customers the poor waitress was expecting. Everything was a couple notches too fancy, and the other guests were wearing considerably nicer clothes than our salt stained Lycra jerseys.
Nonetheless, they had pasta, so we were happy.

I still wanted to do 30km more before going to bed, so I didn’t linger long with the others and set off into the night again on my own. But around midnight, still 15km short of my goal, the signs of tiredness came. I started forgetting how I got where I was and had trouble concentrating on the route.
So after the next village I hid behind a hedge and rolled out my bivy bag, setting the alarm for 3 hours later.

Around 04:00 in the morning I was back on the bike, eager to get as many kilometers in before 24 hours had passed on the race clock. My energy didn’t last long, so around sunrise I again had to roll out my bivy bag behind some trees, and catch 3 more hours of sleep.

The second day didn’t have the monster climbs of the first one, instead it meandered along and across the little hills, following the pilgrim route of the Via Francigena and later the white gravel roads made famous through the l’Eroica.

Every couple of hours I would roll through the next picturesque and ancient city or village, weaving my way through the tourists and seeing more old stones than my mind could handle. After the 3rd village, they all started to look the same to me, although still beautiful.
The kilometers rolled by, my audiobook rolled along and I kept cranking the pedals. Sunset was a relief, since it brought cooler temperatures.

Around midnight I ticked the biggest climb in this section, the uphill towards Radicofani. According to the Instagram pictures of other riders, it’s a fairly beautiful place with a nice castle at the top. I however arrived in the pitch black of the night, ergo didn’t notice much of the scenery, and to be honest, I don’t know if I would have been excited by even more old stones. Nonetheless, the village had a little drinking water fountain, so I enjoyed some leftover pizza and refilled my water storages.

I managed to squeeze another 3 hours of riding in, before hitting the bivy bag at pretty much exactly 400km, just after Sorano, a nice little village hewn into the hillside, one I wouldn’t have minded visiting in the daytime.

48 hours after start, 8:30 in the morning, my alarm rang and I collected my stuff, hopping back on the bike for the final ~130km (I didn’t know how long the trail would exactly be, since there were a couple of contradicting numbers on the websites). “Highlight” of the last day would certainly be the little peninsula close to the end. “Highlight” is put in quotes because looking at the map it’s an unnecessary detour on the way to the finish, and the gradient looked nasty, especially considering I’d be reaching it in the hottest time of the day. Morale would be low.

But before having to tackle that issue, I first had to conquer one minor climb, at the top of which I met a Brit who looked like he would fit into the first editions of the Tour de France without question: He was pushing his bike with flat tires on the gravel road, having slung at least 6 tubes over his shoulders. I asked him whether he needed anything, but he declined and said his mate would be waiting down the road somewhere. I was amazed at how calm he appeared, if I were him I’d probably have quit the race after that many punctures, or at least have a sore throat from cursing out loud nonstop.
However only an hour later both of them zoomed past me at fairly high speeds, leveraging the advantage of their light and fast road bikes. I wonder how long it took them in total to fix the flats, and if that was part of their timing calculation…

Close to the coast I met two other Germans and we chatted for a while. But my right thigh muscle had some issues since the morning, so I wasn’t able to keep up with their speed and let them go. However for the next 70km we kept leapfrogging each other, them taking longer breaks and then overtaking me again.
The peninsula lived up to its promises, delivering loads of heat and fine sand, with nastier and nastier roads the closer I got to the top. Just before the final incline I overtook the two Germans again, and with my fat tires had a big advantage on the downhill.
Once off the damn peninsula I went into time trial mode and tried to keep the speeds high, but nonetheless got overtaken by 5 fast riders drafting off each other, with no hope of matching their speed due to my fatter tires and complaining muscle.

The two Germans caught me again close to the finish, so we sprinted the last couple kilometers together, trying to avoid being overtaken by anyone else, and in the end crossing the finishing line together, getting greeted by applause from the earlier arrivals, sitting on the porch of a sports club house.
We quickly joined, trading stories, enjoying food prepared inside and welcoming the racers after us. 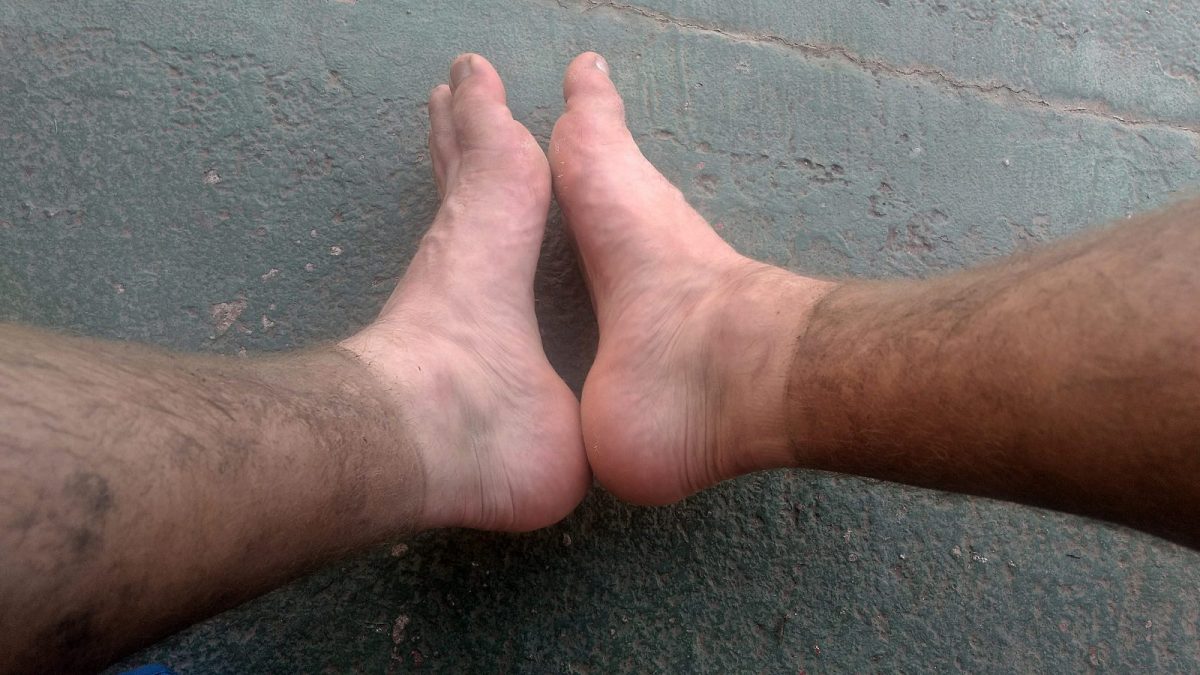 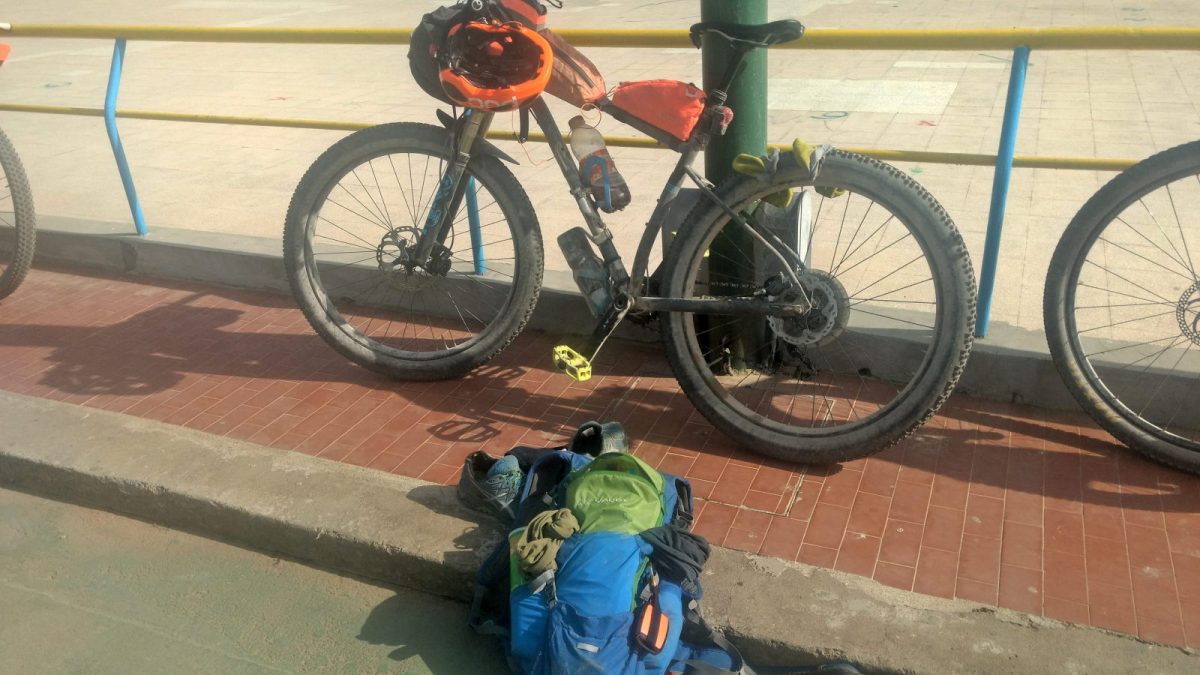 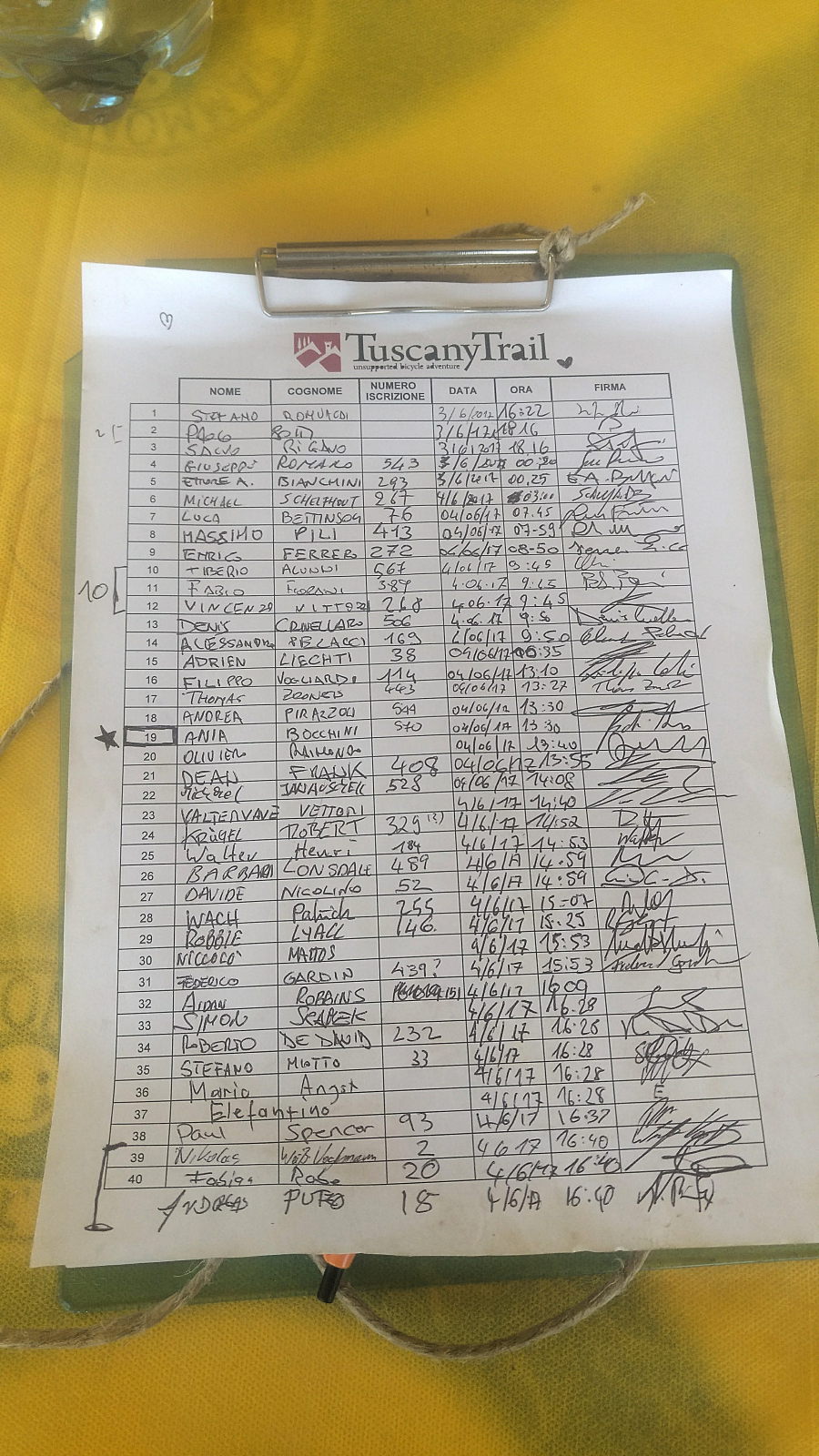 Overall speaking it was a very nice event, and again considering how new I was to mountain biking it was very surprising that it went off without a hitch.
I certainly learned a couple of lessons for the next time:

Overall I’m a bit confused since my excitement levels for this event never matched that of the other riders, who seemed to have the time of their life, whilst I’m considering it “just” a cool trip. But nonetheless, I’ll probably be back next year, even if only for the endless amount of pizza, pasta and ice cream 😉