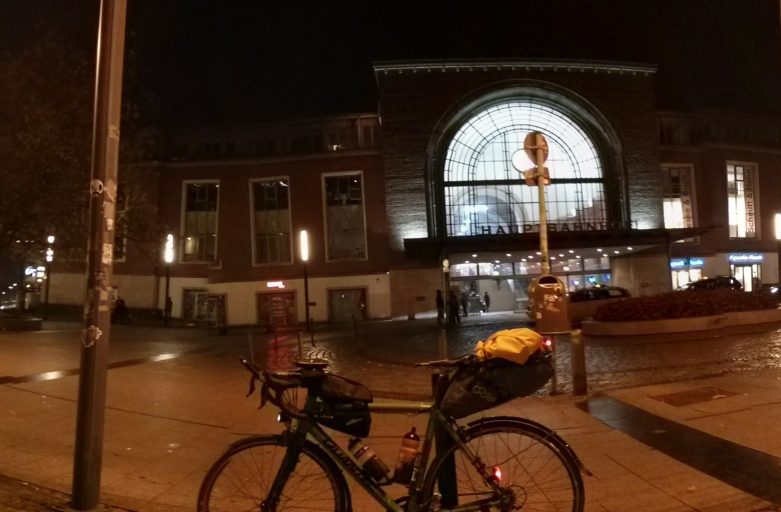 Back in 2014 I had done a series of long distance rides called the “Super Randonneur”, but had scratched at another long distance event. I had played with the idea of signing up for my first Transcontinental Race, but first wanted to complete a ride longer than 600km before doing so.

The fact that I had quit a 1200-Brevet kept nagging me to the point that I decided I want to do something in the same ballpark on my own, ideally before winter. Instead of writing my thesis, I planned the route, checked the weather, prepared my bike. I had just gotten my new wheels with a SON-dynamo. In combination with “The Plug” I should finally be able to throw out most of my worries about powering my phone. Also, I hadn’t yet tested out my new saddlebag.

Everything came together and I had a blast at the tour. I was way better prepared, mostly mentally, than at the brevet. I knew how much sleep I’d need to keep going, I was able to find my own rhythm. It was really fun to discover your own country this way, and the fall colours on the trees made for a beautiful scenery.
I slept both times in some forest, I had my bivy and sleeping bag with me which were more than warm enough. In the morning of the 3rd day, I started thinking about the goal of 60 hours. I kept calculating the necessary average speed, overthought the necessity for each rest stop 3 times and just kept pedaling.
The area around Kiel had more hills than I expected, and it became stressfull to ride, since the whole cycling path was covered under leaves. I somehow expected a big downhill before the city and started cursing out loud when hill after hill appeared in front of me, with only about one hour to go.
Luckily my fear of getting a mechanical right before the finish line didn’t come true and I managed to arrive right in time.
In total I slept about 9 hours and actually still felt quite fresh in the finish.
I learned a lot for future trips, both in the mental as in the physical area. Hopefully one of those will include the Transcontinental race in 2015 🙂