Stumbling up the hill 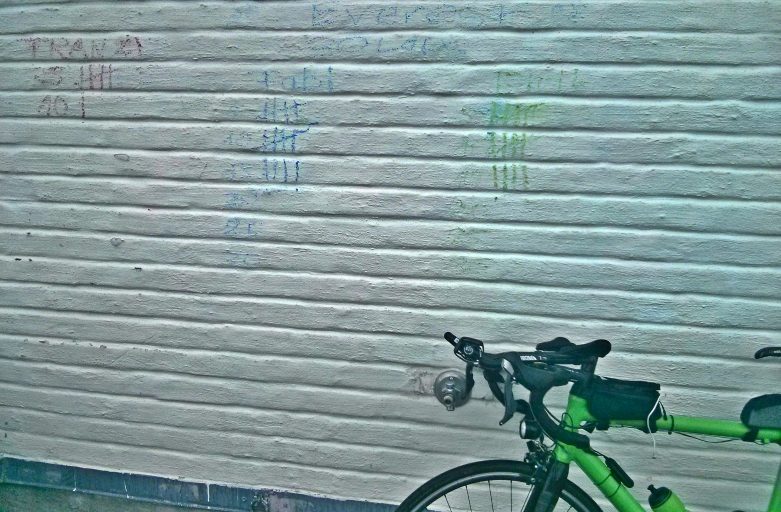 Shortly before the end of my exchange semester here in Trondheim I wanted to try out “Everesting”.

The idea is fairly simple. You choose a hill and measure how much altitude you are gaining with one ride up. Then you calculate how many times you need to ride that hill to gain the same altitude as Mt Everest (8848m). And then you ride it. Probably very often.

The actual execution however… that’s a different story.
One of the iconic hills in Trondheim is the road up to Skistua. On top of the hill is an old radar station that’s visible from most of the city. I’ve only gotten up there by bus, once. And climbing on a bike… Well, it’s not that I hate it. I’m just not good at it. Perfect preconditions for this interesting endeavour. But as with most of my trips so far, a lack of planning or preparation hasn’t kept me from trying, especially when the stakes are so low: Whenever I’d want to quit, I could just go home.

Before we could start, there were some additional hurdles to cross: My back wheel was in the bike shop, since I haven’t treated it as kindly as I should. And before my long trip home, I wanted to make sure that it is in working order. So I had to borrow a wheel from my local cycling buddy Eirik, with whom I’ve undertaken most of the past trips here in Norway.

I planned on using 24 hours to see how far I would get that time. In theory, it should be enough to actually make it to the top, but I wasn’t dead set on this to happen. I personally like starting in the night, so we met at 11pm in the bike basement, Eirik was so kind as to set up my bike while I was busy packing all the stuff last-minute. I had only slept for meager 45 minutes, because I came home from a sailing trip just a couple of hours before. Shortly past midnight we set out to the hill, both laden with food and spare clothes. It was just a 30 minute ride to the foot of the hill but it was pouring down rain. Then a couple hundred meters before base camp – Bang. My borrowed rear tire burst. Reaching the parking lot where we wanted to stay, we checked the tire to see that it was delaminating. Eirik didn’t seem that surprised and said he had brought a spare tire for that case. Only that he didn’t, he had forgotten it at home. So he rode back home, while I set up camp under the shelter for shopping carts, preparing sandwiches and reorganizing the bags.

A little while later he returned and we fixed everything. Quickly we stowed our stuff away and hop on the bikes, it’s already 2am. Before even leaving the parking lot, I manage the next faux-pas: Falling over with the bike for no good reason. I had tried to close the rubber strap which usually holds my pump in place – While doing that, I lost balance, didn’t manage to unclip and hugged the asphalt.

So, just to recap: I don’t like climbing, it’s cold and raining, I’m overly tired, the first mechanical happened before the climbs began and I just hit the dirt. All before climbing the first official meter. We can therefore conclude two things: A) Preparing everything last-minute isn’t the best set-up B) I am going to have a lot of fun in the next hours.

When we actually did start the climb, everything settled into its place. The hill was perfect, not too steep, I could get up top in under 45 minutes and on the way down it was just steep enough that you didn’t need to use the brakes. Eirik and me did the first climb together and although it was still raining, we started to have fun. This of course is a relative term: You still get way too hot on the way up and way too cold on the way down, it’s always the same view and it still is early in the morning, although being this far north means that there is no night at all, just twilight.

On the top of the hill is a gate to what seems to be a military station, so after each climb I’d touch the sign telling me not to take any pictures. After each downhill, we’d make a chalk mark on the wall of the supermarket, indicating our completed lap. The time between those two points was filled with audiobooks, heavy breaths and pedaling. Touch the sign, close all 5 layers of clothing, roll down the perfect hill, make chalk mark, refuel on nuts and drink, repeat. Again and again and again.

After a while I felt the toll of the sleep deprivation. I couldn’t quite follow the audiobook anymore and on the uphills I’d drift into this state of severe daydreaming, where I’d snap out of randomly, not knowing how I pedaled the last meters. There is next to no traffic up that hill, especially in the early morning, but for the downhill sections I’d better be completely alert.
Eirik didn’t seem that happy either, so we decided to take a coffee-break. Seeking shelter in a back entrance of the supermarket, we started cooking coffee on the camping stove and munching sandwiches. I actually fell asleep mid-eating, so I decided to take a nap right there, in the wet clothes, while Eirik went for another lap.
While Trondheim started to wake, and the early joggers surely wondered what that hobo in Lycra was doing in front of the supermarket entrance, I regained some strength and headed out again soon after.

Our next reference point in time was the awaited arrival of Franzi, a fellow biker and exchange student, who promised us chocolate cake and more coffee. She had been the smart one, sleeping through the night and setting her sight on smaller mountains to climb. We didn’t quite know when she’d actually show up, so after each downhill I was quickly scanning the parking lot from afar, whether I’d see any new bikes. After the 9th climb she showed up and our mood lifted instantly. The wonders a smiling person can do to a grumpy one were especially apparent in Eiriks face, as he finally had someone who was fresh enough to keep up with his climbing speed. We decided to do another quick lap together, before we’d go for that chocolate cake we saw her carrying.

While shoveling cake in our mouthes and drinking more coffee, both Eirik and me vocalized what we both had felt after the 2nd lap: The actual Everest would be way too much. With the current speed, it would take me around 30 hours in total. We battled us a little with who had the more legit reasons. He cited some preparations for the final presentation of his thesis, while I felt that falling asleep on a bike is a pretty good reason not to finish it. I guess if it weren’t for Franzi, we would have turned around right away, but she’d only climbed the hill once and was still pretty fresh. Also, it had stopped raining for the first time in 8 hours, so that was a plus for the mood.

I still decided to skip the next round again, in order to take another nap. After that I rejoined the party and started climbing. The road became more trafficked, lots of Norwegians going on their ” søndagstur”, a traditional hike with lots of chocolate. Also, there were some youngsters in uniform undergoing some kind of Boot Camp. It was motivating to pass them one by one.

A couple of climbs later Eirik finally conceded and announced his retreat. I felt kinda good, but also wouldn’t have minded going home, so I said nothing and waited for Franzis reaction. She couldn’t decide either, so in the end neither of us wanted to be the one who admits defeat which resulted in us taking another climb. Although we were cursing on the way up and I was sure I’d go home after what was number 13 or 4.200m in altitude, Franzi played a mean trick: She pointed out that if I’d go for another climb, I’d pull alongside Eirik in our makeshift leaderboard. So under even more moaning and cursing and whining we started what was my 14th climb.

In the end we couldn’t quite find words to describe the character of the ride. “Fun” certainly isn’t the right one, especially with hours and hours of rain. But it also wasn’t so bad that I’m not interested in trying it again, sometime someplace back home.

This concludes my first blog post here. I am surprised by how much text I can produce for just a couple hours of up and down. I’ll have to see how the other posts turn out.

One thought on “Stumbling up the hill”