Jumping in at the Deep End 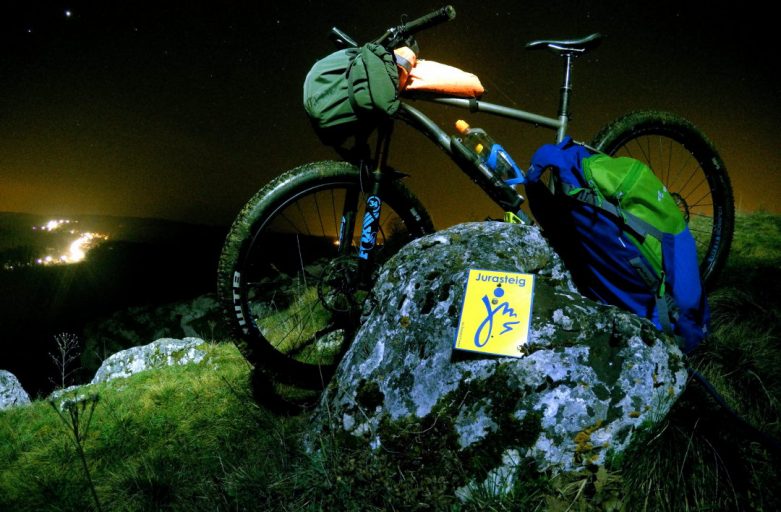 In the end of march the weather became nice enough to start thinking about using my new mountain bike properly for the first time. A more sensible person than me would probably start exploring the offroad world by slowly growing the length of their trips.
However, the Komoot App had promoted a collection of trips called “Bikepacking in Bavaria”, which seemed to be perfectly tailored for me: A long loop with lots of elevation and an endless amount of trails but without entering any true alpine areas. In the not-unlikely case of something going wrong (either be it technical with the bike, or something with my body) I could just walk down the hill into the next village, instead of being stuck on a mountain in the middle of nowhere. 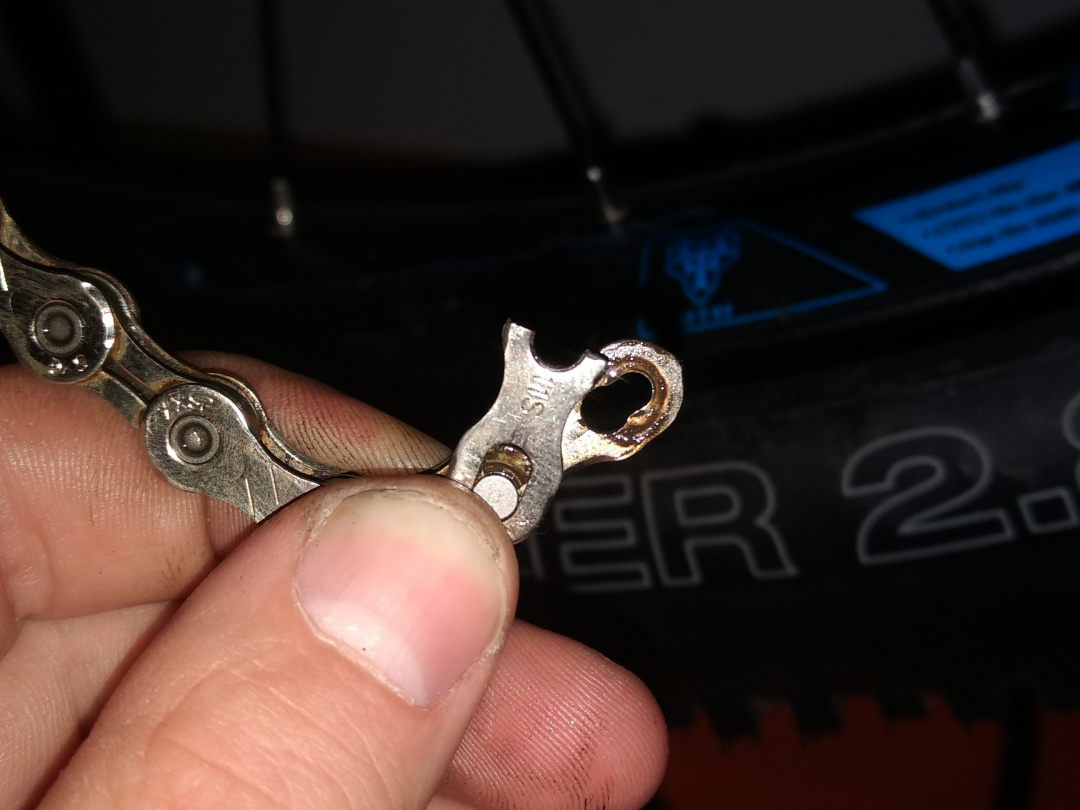 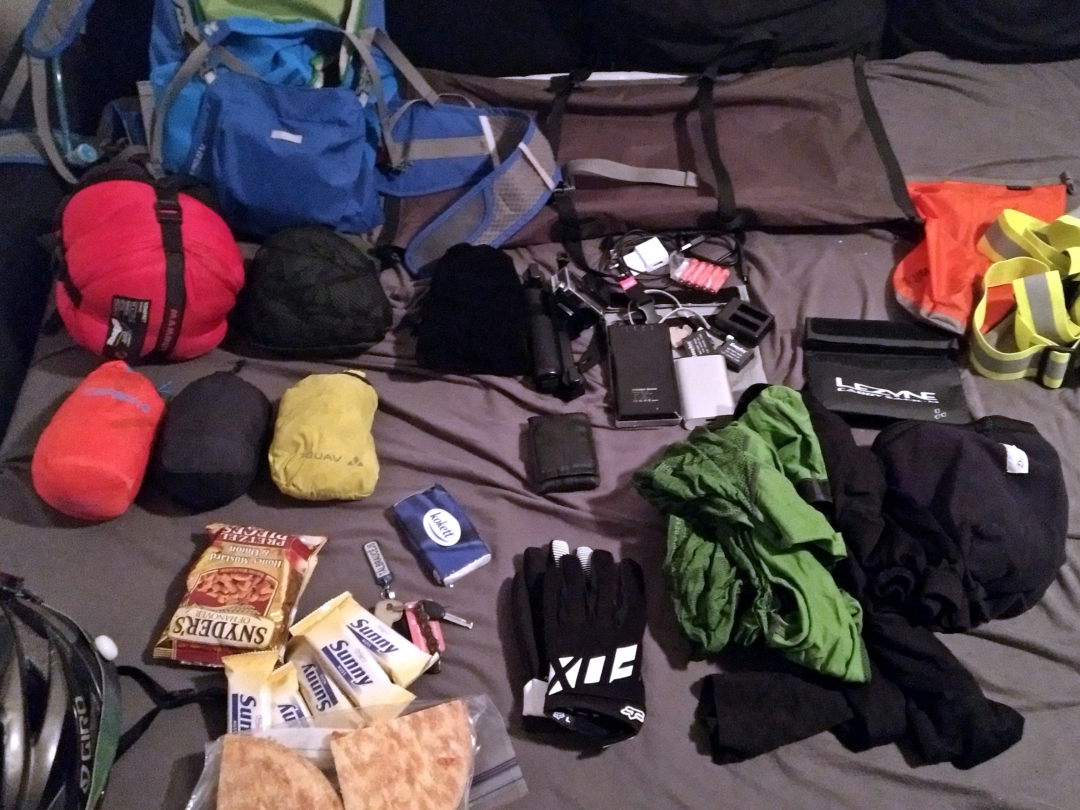 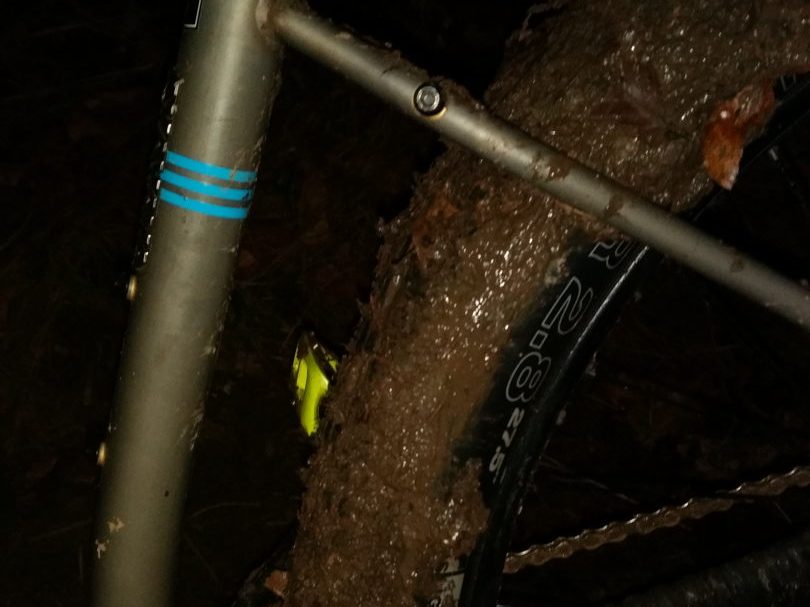 The plan was to pack all the stuff and take the last train to the start of the route, to ride till whenever I get tired and then sleep somewhere in a forest. However, whilst checking the bike I saw that my chain was about to break. Since I had spare links that wasn’t too big of an issue, but when I tried to put the rear wheel back in I realized that the fancy mechanism for the axle wasn’t working properly and that it would slide out on its own after just some meters of riding.
So the supposed 10-minute “I’ll just oil the chain and make sure the gears work properly”-check-up turned into 1.5 hours of cursing the designer of that mechanism and eventually fixing it. Fingers crossed that if I have to do it out on a ride, it won’t take that long…

By the time I was finished with fixing the bike, I only had 5 minutes left to pack my clothes and camping gear, otherwise I would miss the last train. Since I wasn’t keen on realizing somewhere in a forest that I had brought 7 pairs of socks but no sleeping bag, I gave up the idea of making that train.
Nonetheless, a quick glance at the map and the train schedule showed that I would be able to start from Regensburg with only minor adaptions to the original route and that I had enough time to pack everything and make the last train.

So, finally, at 1:30 in the morning I found myself on a muddy trail somewhere in a forest North West of Regensburg, trying to pick my way in the light of the headlamp. It was here when it dawned on me that mountain biking was much more than just suffering while riding uphill and gripping your handlebars in sheer terror when riding downhill: Countless small roots and not-that-steep uphills with tons of leaves forced me to take my feet off the pedals constantly because I had no clue of how to balance on the bike properly or how to choose a line through and across the little obstacles.
The terrain really wasn’t that technical, as a hiker/road biker I would boldly have claimed that anyone could ride along that path, given a proper bike. Now I had a bike, but not much skill 😀
I lowered the tire pressure in an attempt to get more grip in the mud (and since I had to have the feeling that it was worth converting to tubeless tires), but nonetheless ended up pushing the bike way more than anticipated.

After a while I joined the original route but again had to push my bike since it led through a small nature reserve where riding was forbidden.
If I were forced to stop that often on a road bike trip, I’d have gotten super frustrated with my slow progress and all those damn interruptions. However, on this trip my goal was not to ride fast, but instead to experience everything which gave me the liberty to just stop and play around with the camera a little.

For the night is dark...
... and full of bikes & stars
Robbers Hollow

For some reason the tiredness never came, and I was content riding and pushing my bike through the night. At some point I saw signs for a robbers cave and decided to check it out. I kinda expected to find some partying teenagers or shady drug dealers, but I had the 20 meters wide cave all to myself and played around with the camera some more.

Once sunrise arrived, I finished what was designated as the first leg of a five day trip. It became obvious that my original idea of doing the full 200km in 24 hours was not going to happen, but I was happy with just riding without focusing too much on a fixed schedule. Instead: More photos of picturesque medieval villages & castles. 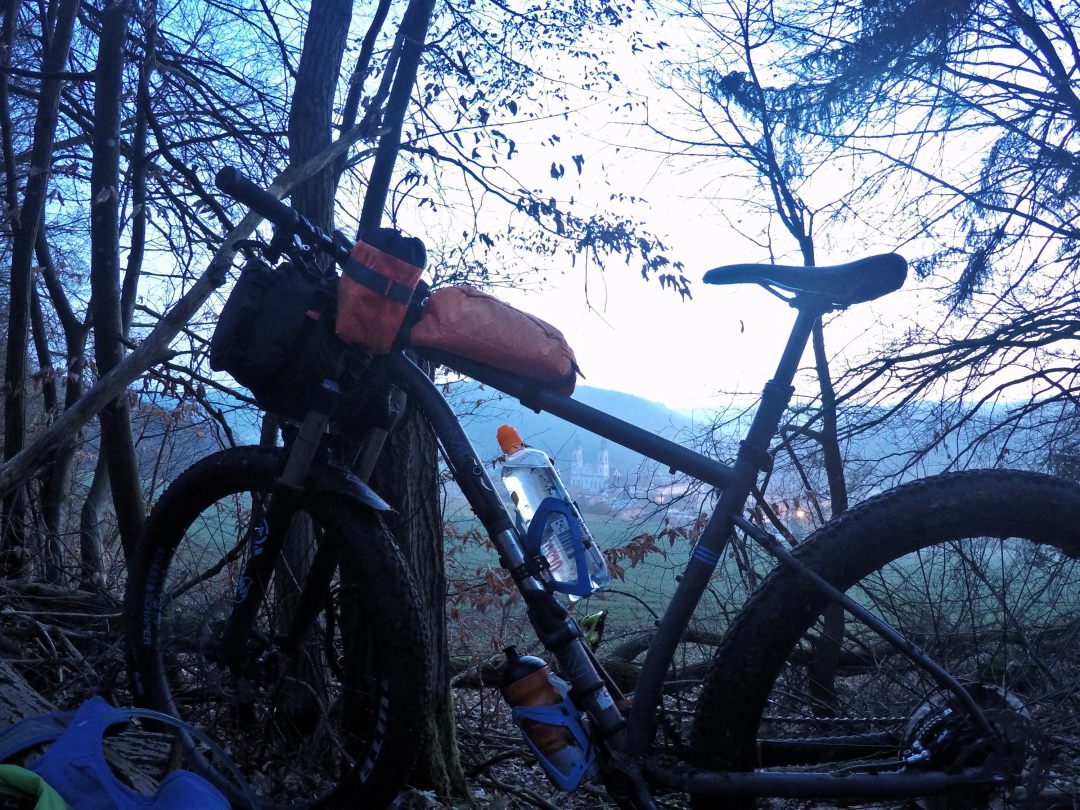 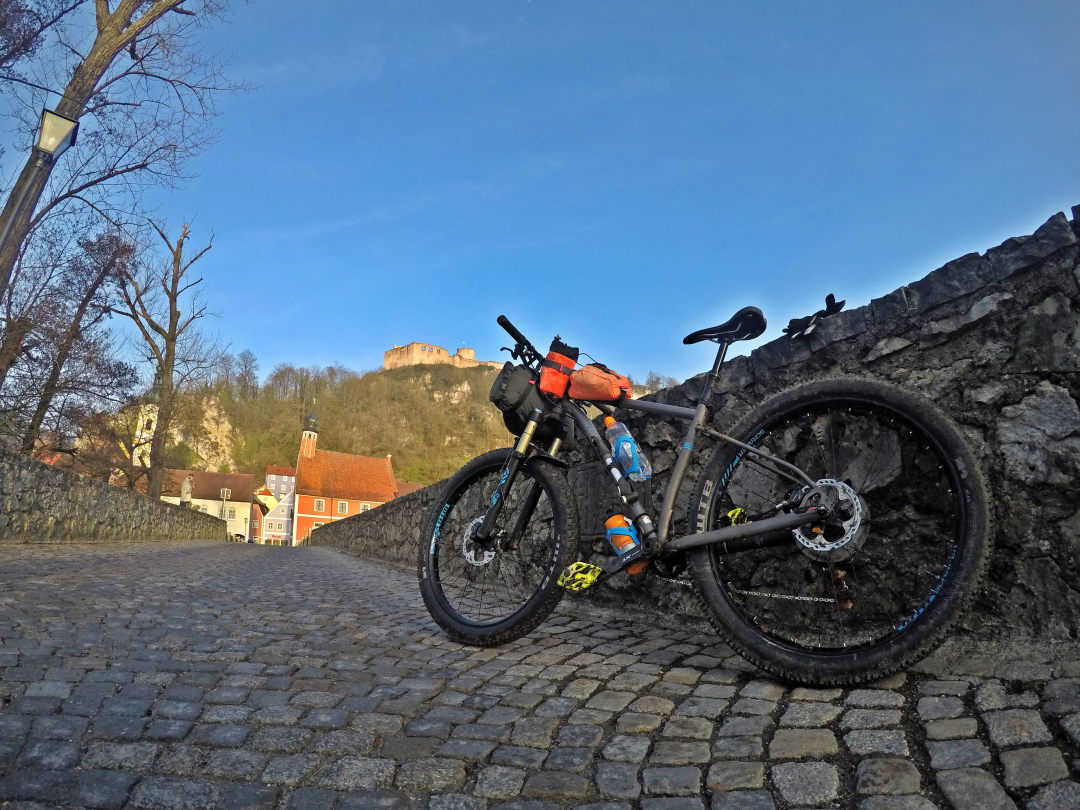 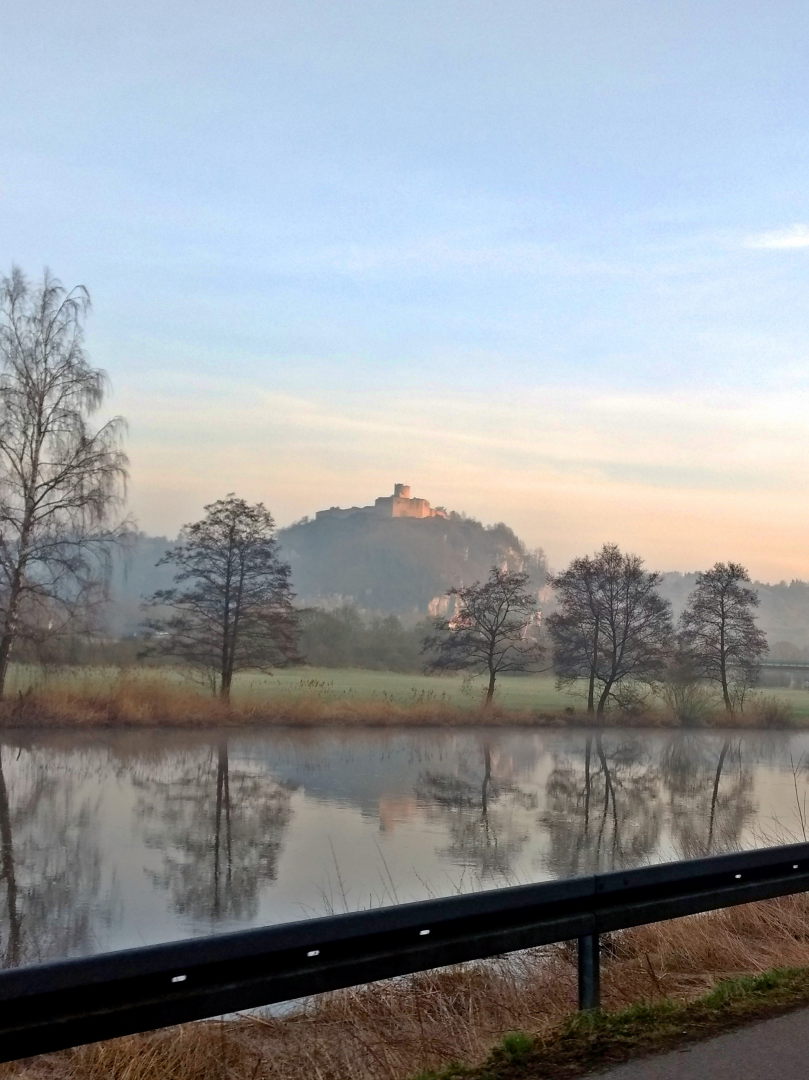 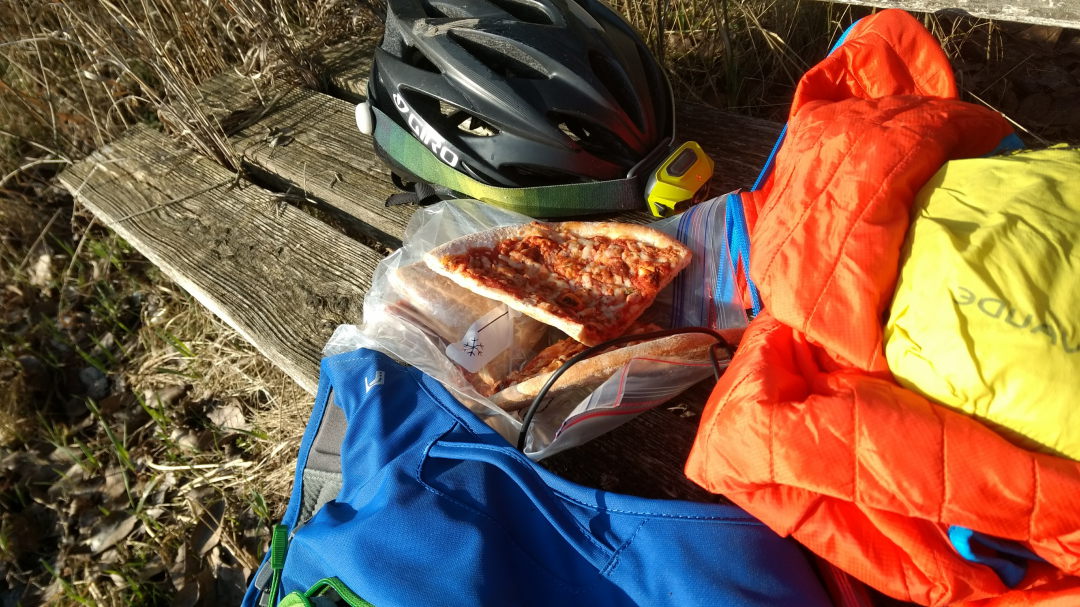 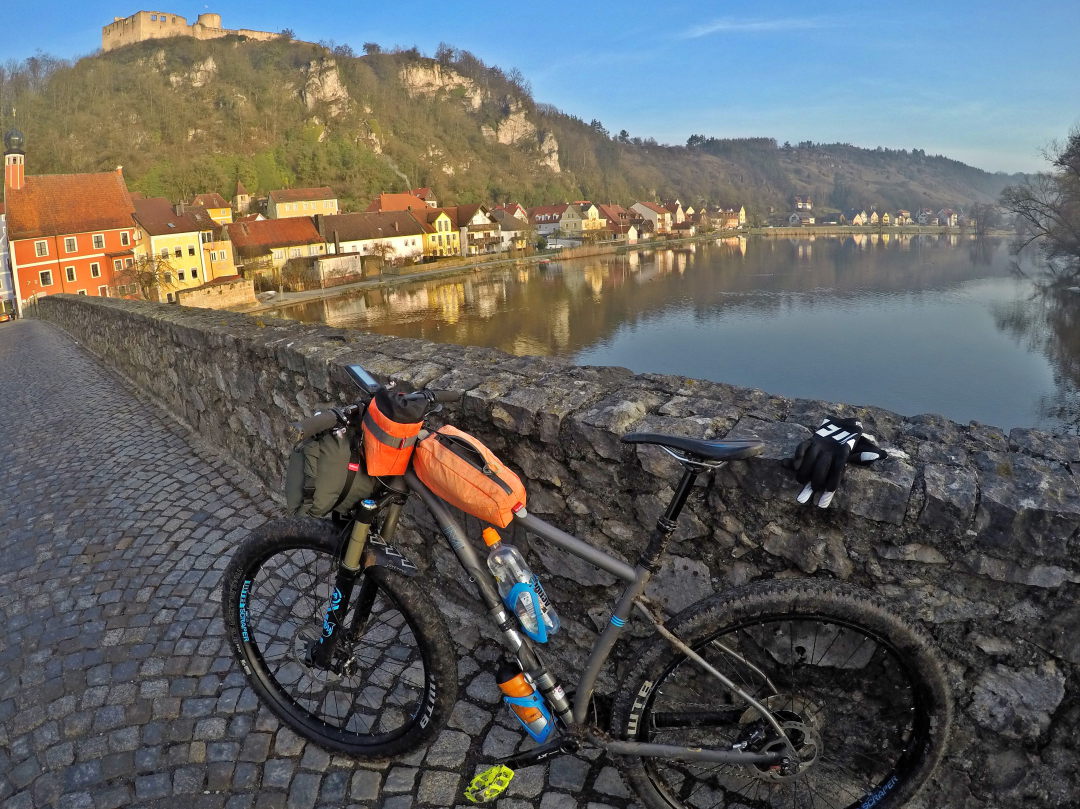 A little while later on a fairly fast descent whilst on a dirt road, the tires started to feel really wobbly and there were forces pushing the handlebars in the opposite direction from where I was turning. Turns out that when lowering the tire pressure in the muddy areas earlier, I had overdone it. In tubeless tires the air is trapped solely between the rim and the rubber casing made airtight by some liquid latex and not trapped in an additional tube (hence the name 😀 ). The system needs a minimum amount of pressure, otherwise the tire won’t be pressed against the rim hard enough to create an airtight seal and the wheel starts “burping” air.

Apparently I had been burping air for quite a while now, as I was rolling along on flats. Reinflating took forever, since you first need to rapidly increase the internal pressure to make sure the tire is pressed against the rim again, and after that you’re left with filling the immense volume of plus sized tires through a little hand pump.
But the weather was nice and I was in no hurry, so I took it as good practice for later trips with more adverse conditions.

After that it was a constant up and down along little river valleys, in and out of forests, on single trails and dirt roads. Once I was on a little ridge and the trail ran over the lip into a slightly steeper and tiniest bit more technical section. Again, as a hiker/roadbiker I would have scoffed and named solely the lack of a proper bike as reason for why I wouldn’t be able to ride down there.
But the past hours on the bike had taught me my limits and to be more humble. So, expecting to crash, I did the only sensible thing and mounted the camera on my chest to get proper footage of the crash.
I did not disappoint myself and tumbled off the bike within the first meters, only to make a fool out of myself by trying to get on the bike again and promptly tumble off it just a couple meters later.
Luckily no one was there to see my beginner techniques of riding…

Over the course of the day it became obvious that this probably was one of the more remote regions of Germany: I hadn’t seen a supermarket in hours! One explanation could be the military exercise area on which north border I was riding along.
Towards the afternoon I still hadn’t felt the need to take a nap or any break of significant length, but I also hadn’t increased my average speed to have any hope of completing the whole course in one day. Of course, since I had my sleeping gear with me, I could have spent the night out and taken a nap once I felt too drowsy to ride, but somehow I was ok with leaving this route as unfinished business and decided I’d try to get to a train station by evening. Looking up from where the next trains would be running was harder than expected, because I hadn’t preloaded the maps and the mobile internet connection was spotty at best. So I kept an eye out for signs for tourists with maps on them, and eventually decided that the city “Neumarkt” sounded big enough to have a train station and diverted my route towards it.

I reached the city on top of a hill, overlooking all the houses. Directly in front of me were stairs, which offered themselves as perfect finale for my first offroad adventure. So I dropped my saddle low, gripped my handlebars in terror and rode down the steps. A bit too late did I realize that there were a lot more stairs than initially expected, and that I still had my suspension fork locked, but by that time I was already committed and the huge tires provided enough dampening to let me arrive at the bottom of the hill without any major problems.