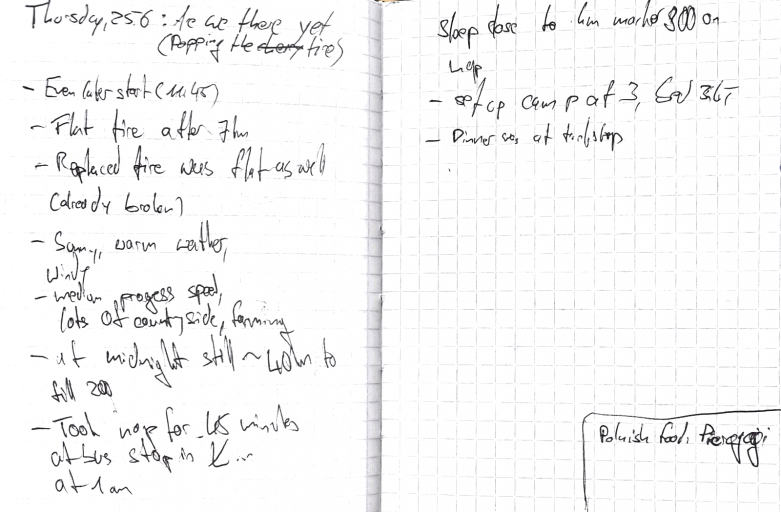 Are we there yet?

After the usual late start I soon found a compelling reason to stop again: A flat tire, the first on the whole trip. Funny how I had my rear wheel repaired more often than my tire in the past 2.000km…
But no biggie, I had two spare tubes, putting one of those in I was soon after again on my merry way through the warm wind and nice polish countryside. Or so I had hoped. But apparently the spare tube was already broken at the valve, which led to another stop again a couple of minutes later.
Now I was left without spare tubes, but I wasn’t too worried since I still had a patch kit somewhere down in the depths of my bags. So I just made a mental note to look for bike shops or promising hardware stores along the route.

The rest of the day wasn’t as fast as I had hoped, but I had finally climbed out of the hole of my bad mood, probably in part because of the nicer weather and the quieter roads.
While eating dinner at a truck stop I got reminded of my time in Canada by one of their food options: Pierogi, polish filled dumplings. I remember how we doused the bacon filled dough with maple syrup, a very interesting combination 😉

At around midnight, I had only managed 160km, so an hour later I just took a nap in a bus stop close to Łódź and then continued on for another hour before setting up camp for the night.

Sadly my watch had stopped recording GPS-information, so there is no track available.

Next Post: Day 20: “Life is what’s happening while you’re busy making plans”, or: “At least the plans were good”