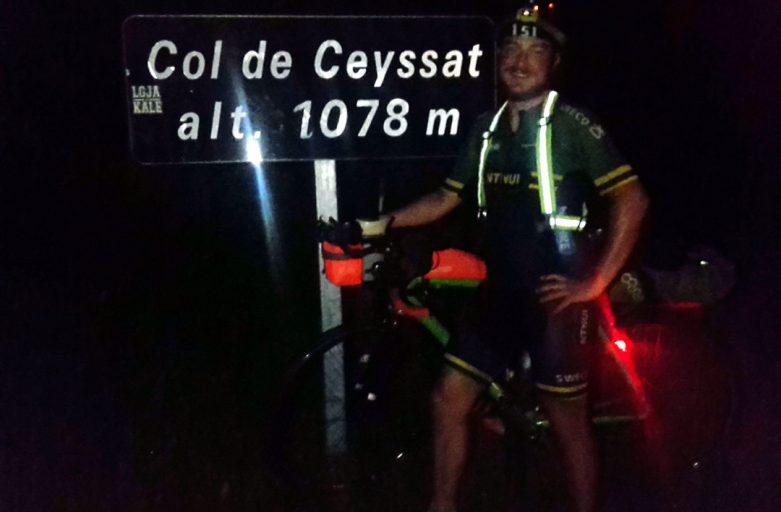 After just 4 hours the alarm rang, but much to my surprise I felt very fresh considering the epic day yesterday and the lack of sleep in the past 48 hours. In a matter of 30 minutes I packed up the camp (which is actually still too long considering how little stuff I’m carrying) and started pedaling into the still dark day.
Once I had settled into a rhythm I rummaged through my pockets looking for my toothbrush (do as much as you can while cycling, even brushing your teeth) and realized that my Leatherman (Knife & Multi-Tool) was missing…
Damn. I had been cycling for around 15 minutes, so I quickly decided against leaving it behind and turned around. I hoped it had fallen out at the camp site, since it would be pretty hard to spot on the road. Another 15 minutes later I was back where I had begun and luckily found it pretty much where expected, lying in the grass.
Of course this was a stupid mistake (leaving the zipper open), and losing the half hour was annoying, but overall it didn’t disturb me that much. I was pretty zen because of having that much lauded schedule (I have a feeling that this word will be used a lot during my report) and was just glad to have the knife back.

The schedule called for ~280km with just more than 2.000m of climbing on the rolling hills of the french countryside. This would put me just outside of Clermont-Ferrand, where the first control of the race was.

With the sunrise 2 hours later came a big wave of tiredness. The micro-sleeps set in again, and I thought about taking another caffeine pill. But I wanted to keep them (and my high sensibility to caffeine) for more pressing situations instead of just taking them whenever I felt tired. So I put on my rainpants & jacket against the bugs and just lied down in some grass next to the road, setting the alarm for 20 minutes later.

Back on the road, the French slowly woke up as well. Since it was a Sunday morning, quite a few road bikers were out on their weekend rides. I found an awesome little boulangerie which had about the best chocolate cake I ever tasted. But also the savory pieces were awesome, filled with delicious Salami. Sitting on my bike with a big grin, munching away whilst the sun was shining, I was almost tempted to turn around and get more food from there. It didn’t feel at all like a race with bucket loads of kilometers and merely a few drops of sleep 🙂

But just moments later I got reminded that this is not a little solo tour in the best way possible: Whilst cycling along a dyke, a lady in cycling clothes came jogging down, smiled, waved and started taking pictures with her phone. My first fan 😀 I had read comments in the Facebook group of how people check the tracking website and then hunt down riders on the road to cheer them on, and I must say it was always a very uplifting feeling during all of the race when random strangers payed you attention and gave you credit 🙂

Early in the afternoon I made the first McDonalds-Stop of the race. They even had a special burger with blue cheese, my mouth got watery the moment I saw the sign… Sadly the burgers didn’t quite live up to their promise, but the WiFi and clean restrooms were welcome. So I spent over an hour in the restaurant relaxing and meddling around with the phone (thanks to the issue with the broken SD-Card), meeting a couple of other racers enjoying the same comforts.

Soon after starting again into the hot and humid afternoon the next big wave of tiredness hit me. Since I was on quite a busy road, I didn’t attempt to fight it and took another nap in a driveway under a tree, before the micro-sleeps even set in.

Early in the evening I passed my minimum distance marker for the day, which was also the first time I spotted the Puy de Dome in the distance. The rolling hills slowly gave way to a view of the volcanic mountains ahead. But since I still felt fresh, I set my sights on completing the checkpoint with its parcours before getting proper rest later tonight.

When I arrived in Clermont-Ferrand at the hotel where the control was located I got greeted by a very welcoming pair of last years racers and some other fans. I didn’t linger for long because I wanted to finish the first serious incline of the race before the end of the day.

Already in the city the gradient kicked up considerably and I pedaled at snails pace past some fancy schmancy wellness hotels & spas. Riding up the actual volcano Puy de Dome was forbidden, so the parcours demanded you to ride to the much lower col next to it.

I knew that this was only a taste of the upcoming days in Switzerland with much longer climbs, so I took it slow and therefore got passed by 2 other riders on my way to the top.

I met them again at the sign marking the highest point, where we took our pictures to proof that we made it all the way. Right at that time it started drizzling, so I got my rain gear out and started descending, doubling back on the route I had just come up.

Night had fallen and I had been awake for roughly 20 hours, but I kept pedaling, attempting to get further away from the densely populated areas in search of a quiet place to sleep. Shortly after refilling my water supplies at a graveyard I took a turn on to a little dirt road and followed it for a couple of meters. There were some bushes blocking the view to the road, so I rolled out my bivy bag in the ditch and made myself comfortable, wondering how close to Switzerland I would be the next time I would sleep.